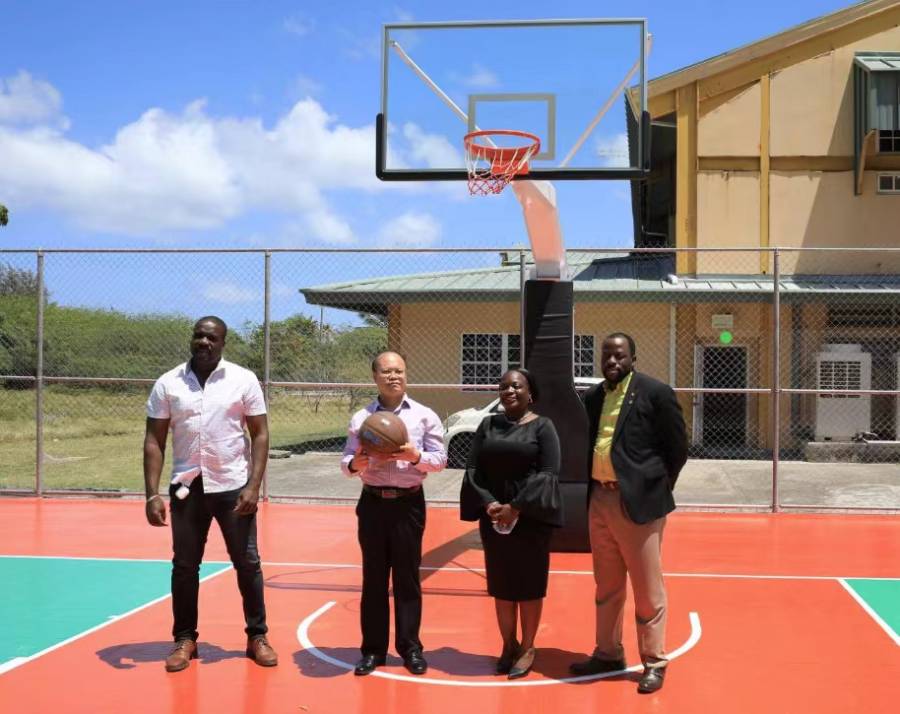 On 8 April, the inauguration ceremony of the Innovated China-Grenada Youth Friendship Basketball Court was held in the Youth Centre at Grand Anse, St George.

The innovation project funded by the Chinese Embassy in Grenada, which took 5 weeks to complete, was another gesture gift by the Chinese People to the youngsters of Grenada, according to the Chinese Ambassador, HE Wei Hongtian. Hon. Norland Cox, Minister for Infrastructure Development; Hon. Kate Lewis, Minister with responsibility for Youth Development; Hon. Winston Garraway, Minister with responsibility for Disaster Management and representatives from the Ministry of Sports and Ministry for Foreign Affairs attended the inauguration ceremony.

In his remarks, Ambassador Wei stated that youth is the country’s future, also the future of China-Grenada relations and friendship between the 2 peoples. China successfully hosted the 2022 Winter Olympic and Paralympic Games not long ago. The Olympic spirit illustrates that sports is a form of self-expression and a symbol of long-term friendship and solidarity. The Embassy continued its contribution to the development of the youth, demonstrating the friendship and collaboration between China and Grenada, he hopes that the youth will serve as a bridge for friendly relations, contributing to a better future for both countries and the world.

The Ministers highly commended the Chinese side for their outstanding contributions to the country’s economic, social, cultural, and sports development, emphasising that the renovation had given the basketball court new life and served as a new testament to the 2 nations’ friendship. The basketball court will become a key venue for youth sports in the country, as well as a means of preserving the friendship between China and Grenada from generation to generation.

Ambassador Wei and the ministers enjoyed throwing hoops in a festive setting after cutting the ribbon for the basketball court.