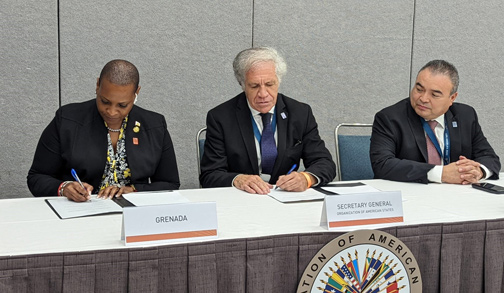 Grenada has formalised an agreement with the Organisation of American States (OAS) to observe general elections on 23 June.

This will be the eighth electoral observer mission mounted by the OAS to Grenada.

Grenada’s Permanent Representative to the OAS, HE Yolande Smith, signed the agreement last Friday with Secretary-General of the hemispheric institution Luis Almagro.

At the signing, Ambassador Smith reiterated the sentiments expressed by Prime Minister Dr Keith Mitchell who had previously underscored Government’s support for the transparency of the electoral process and the inherent value of having the overseas missions observe the process, particularly organisations like the OAS, which continues to advocate for democracy and the strengthening of our institutions within the hemisphere.

An OAS press release quotes the Secretary-General as saying “The agreement we are signing today is an indispensable tool for the Mission to fulfill its functions. I congratulate you, Ambassador Smith and your government, for your democratic conviction and for the openness shown in inviting an Electoral Observation Mission for the upcoming general elections.”

The OAS observer mission will be led by Dr Rosina Wiltshire, a former United Nations Resident Coordinator, and United Nations Development Programme Resident Representative for Barbados and the OECS.

NOW Grenada is not responsible for the opinions, statements or media content presented by contributors. In case of abuse, click here to report.
Tags: electionsgisluis almagrooasrosina wiltshireyolande smith
Next Post