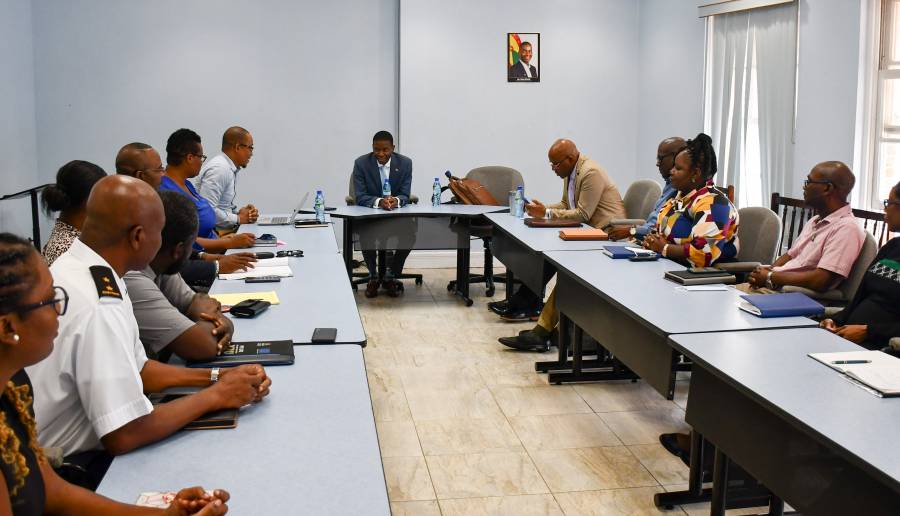 PM Dickon Mitchell: Government does not have a magic wand

PM Dickon Mitchell: Government does not have a magic wand

Prime Minister Dickon Mitchell said that his ruling National Democratic Congress (NDC) which was elected to office on 23 June 2022 does not have a magic wand to fix all issues. He has called on workers in the public sector to give 100% performance in their duties.

Speaking with staff at the Ministry of Finance on Thursday, 7 July 2022, Mitchell, who is the Minister for Finance, highlighted areas of importance that he plans to address in the short term. This was his first official meeting with the staff.

“These include greater use of technology in government business with the goal of going paperless and the regularisation of the staff in the next 12 to 18 months.” Mitchell is a corporate lawyer by profession.

Though there is the option of an in-person transaction, several government services where a payment is required are already conducted online and these include payment of driver’s licence and property via the portal pay.gov.gd.

This payment portal was one of the fast-track initiatives undertaken by the ICT department because of Covid-19. The objective was to reduce the interaction of individuals face to face.

“The government does not possess a “magic wand” to fix all issues, and he highlighted the need for all workers to give 100% in the performance of their duties, as increased productivity will ensure successful output and alignment with the government’s priorities,” said a news release from the Government Information Service (GIS).

The release said that leaning on the people-first team-spirit approach, the Prime Minister encouraged Heads of Divisions to place greater attention on workers’ health and safety whilst consistently improving their physical working conditions.

On the campaign platform, the NDC promised that there will be changes to the public sector if elected into office. “Regularise the status of persons operating within the public service. This includes public officers on acting, probationary and temporary appointments, as well as persons holding contracts of various types, but, carrying out the duties of public officers,” said the manifesto.

The party also gave the assurance that it will undertake a review of the pay and grade structure within the public service as well as train and retrain public officers and other government employees.

NOW Grenada is not responsible for the opinions, statements or media content presented by contributors. In case of abuse, click here to report.
Tags: dickon mitchelllinda strakerministry of finance
Next Post