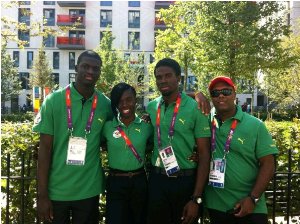 Grenada’s premier track and field club, SpeedZone is in receipt of a timely donation of EC$6,958.21 from the US-based Friends of Grenada Inc.

The sum represents contributions made by Grenadians and friends of Grenada in the Washington DC area and beyond, during an event, held under the auspices of Her Excellency Gillian Bristol, Ambassador to the United States and Mexico, and Staff of the Embassy of Grenada, to honour Grenada’s 2012 Olympic Team and to celebrate Grenada’s first Olympic Gold Medallist, Kirani James.

SpeedZone, at the auspicious event, was duly recognised for its contributions to the athletic training and development of 3 members of the 2012 Olympic Team, namely: siblings, Joel and Janelle Redhead, and the world’s number-one ranked quarter-miler and Grenada Sportsman of the Year (2012), Kirani James.

Giving high praises to SpeedZone, Her Excellency Ambassador Bristol in her communiqué to the club said, “The enclosed cheque in the amount of US$2,606.07 represents a vote of confidence in your steadfast commitment, and endeavours to assist young Grenadians in exploring their talents and excelling in athletics.”

President of Friends of Grenada Inc., Dr. Valencia Bartholomew expressed similar sentiments. She further stated, “We are especially proud of the emphasis that you place on academics as the foundation for success, even in the area of sports. This is evident in how well Miss Janelle Redhead, Mr. Joel Redhead and Mr. Kirani James represent themselves and all Grenadians to the entire world.”

All three athletes, who originate from Gouyave, were trained by IAAF-certified Elite Coach Albert Joseph, before moving to the United States on sports scholarships to further their education while fulfilling their sporting passions. Coach Joseph was also the Team’s Coach for the Grenadian squad at the 2012 London Olympics.

On receipt of the donation, SpeedZone’s president, Coach Jimmy Mathlin spoke warmly of the appreciation shown to all the Olympic athletes and about the acknowledgement of the significant role played by SpeedZone in the fundamental grounding of the 3 member-athletes who represented Grenada at the 2012 Olympic Games. In response, Coach Mathlin said, “I hereby express our deepest gratitude. The contributions made by the Grenadian community, friends of Grenada and your organisation, Friends of Grenada Inc. are very encouraging. To us, it represents your appreciation of the dedicated work that we have done in preparing our athletes for the wider world and towards bringing Olympic glory to our islands. It also represents your organisation’s confidence in our ability to continue doing so; and for that we are humbled to see the proof of your assistance.”

In other club news, SpeedZone’s annual invitational meet was cancelled due to the elections frenzy; however the SpeedZone Fore-Day Morning Walk and Street Sprints will be held on Sunday, March 31 2013 in Gouyave, St. John.

NOW Grenada is not responsible for the opinions, statements or media content presented by contributors. In case of abuse, click here to report.
Tags: athleticdonationembassyfriendsspeedzone
Next Post