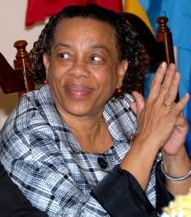 Grenada during the past four years were restricted from fully participating in the activities of a number of regional and international because the government failed to pay the relevant membership fees.

“Grenada has been thrown out of a number of Organisations for refusing to meet their financial obligations over the past four years,” said a news release from the Government Information Service which said that the new Government of Prime Minister Dr. Keith Mitchell plans to pay these organisations to ensure that the island benefits from the privileges provided to members who are financial or show a willingness to comply with the financial requirement.

Prime Minister Dr Keith Mitchell on Wednesday assured Executive Director of the Barbados based Caribbean Centre for Development Administration (CARICAD) CARICAD, Jennifer Astaphan, that Grenada will pay the nearly US$29,000 which it failed to pay in the past four years.

“We will meet some of our commitments, I am optimistic. We can turn things around. I know the value of CARICAD. Grenada will pay,” Prime Minister Mitchell told Miss Jennifer Astaphan, and the Organisation’s Egovernment advisor Andre Griffith who paid a courtesy call on the Prime Minister.

The assurance is the latest efforts by the new Administration to meet a list of outstanding payments to Regional and International Organisations. Apart from CARICAD, among the other Organizations affected are: the Regional Security System, the Commonwealth Parliamentary Association, the Kuwaiti Fund, University of the West Indies, Midwestern State University and Shortwood College.

“We know the importance of CARICAD as an Institution,” said Dr Mitchell told the visiting delegations. “We have benefitted over the years. We are not going to fool around,” he promised.

CARICAD was established in l980 by an agreement among Caricom States to provide technical assistance to member Governments in their quest to improve efficiency through initiatives which seek to transform and modernise the Public Sector.

However, the organisation has been experiencing some challenges with the past few months because most of the projects and the funds it administers have significantly reduced or wrapped up. Prime Minister Mitchell has promised to raise the issue of the future of CARICAD at the OECS Authority level and at the upcoming Caricom summit in July.