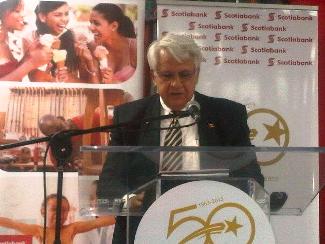 Scotiabank promises to be around for a long time

Scotiabank promises to be around for a long time

Head of Scotiabank in Grenada Mr Elie Bendaly, has given the assurance that the financial institution, which is this year celebrating its Golden Anniversary since opening its doors in Grenada, will be around not just to celebrate its 100th anniversary, but for many more years.

“Based on our foundation, we will absolutely survive another 50 years here and celebration not just the 100th anniversary but more. The history of this bank shows that it opened its first office in 1832 and its foundation you can build on,” Bendaly said on Tuesday during a news conference to launch the Bank’s activities to celebrate the 50th anniversary.

The first Scotiabank branch opened in Grenada on 17 May 1963 on Halifax Street in the building formerly known as Everybody’s, on Halifax Street, with eight employees. It soon moved to the corner of Halifax and Granby Streets — its present location, and over the years has undergone many internal redesigns as part of its customer-centred global rebranding initiatives.

Everything in the bank was done manually until 1987, when the bank introduced computers. This it turn made it the first bank in Grenada to introduce Automatic Teller Machines. “At that time, it was a major change for our customers and a milestone for the bank, and since then we have kept up with the technology, and customers now have other options because of technology” said Kingsley Ashby, Commercial Banking Manager, who has served the bank for more than three decades, and recounted the history of the bank during the launch.

Technology comes with its challenges but the management of the bank has given the assurance that its security system are always strengthening, and whereas they cannot stop breaches from attackers, the system is able to identify violations speedily. “Persons are always trying to defraud the system, but we have invested in a security system that will identify breaches at the quickest possible time,” said Bendaly who assured customers that the bank is “sound and safe.”

The Bank of Nova Scotia opened for business in Halifax, Nova Scotia, Canada, in 1832 to facilitate the thriving trans-Atlantic trade between Britain, North America and the West Indies. Within the Caricom region it opened a branch in Jamaica in 1889.

In 2012, Scotiabank was named Global Bank of the Year and Bank of the Americas by “The Banker” magazine. Worldwide it employs more than 81,000 persons, serving more than 19 million customers in more than 55 countries. In Grenada it has three branches with a staff of over 75.

NOW Grenada is not responsible for the opinions, statements or media content presented by contributors. In case of abuse, click here to report.
Tags: anniversarybankcanadacaricomfraudgrenadahistoryjamaicalinda strakerscotiascotiabanksecuritytechnology
Next Post