Into The Hole of Regression – Backward Ever

Into The Hole of Regression – Backward Ever 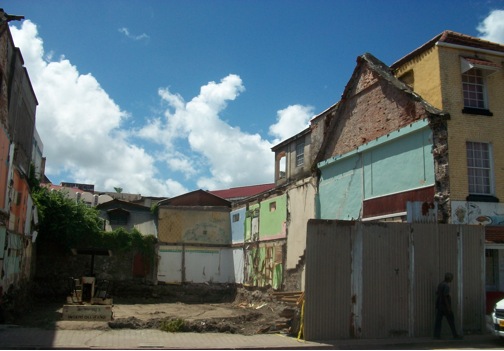 Even though our national anthem admonishes us “to be proud of our heritage”, and our Governor General in her very first public address to the nation reminded us of the value of our built heritage, there appears to be a section of our society that is hell-bent on erasing our history — which has been recorded in brick and stone.

The recent demolition of a “listed” heritage building on Melville Street which had on its Melville Street façade a stone plaque dated 1810, shows the indescribable ignorance and arrogance of the functionaries whose mandate it is to protect our heritage.

In order to demolish the building, which could have been easily modernized internally while retaining the Melville Street facade, which is the norm in enlightened heritage tourism destinations; permission to demolish MUST have been given to the owner by the relevant authority — namely the Physical Planning Unit (PPU) of the Physical Planning and Development control Authority of the Ministry of Works.

The Sentinel is aware that in the past, the foundation had engaged members of the Planning Authority, as the first line of defense, in the absence of legislation, specific to “Built Heritage Protection”; and a measure of co-operation was observed through the Natural and Cultural Heritage Advisory Committee, (NCHAC) which is mandated by law to advise the Board on all matters pertaining to Heritage Buildings in the State, and on which the foundation is represented.

But the recent demolition of this heritage building demonstrates an ineffective or non functioning NCHAC as our representative has reported that no meeting has been held in the past six months, which undermines the work done by the foundation over the years, while highlighting the insensitivity of the Planning Authority to the value of our cultural assets.

If legislation is not put in place urgently, even as we continue to give lip service to heritage tourism, the unique urban character of historic St. George would gradually but inexorably, change into a non-descript destination, as we, in our post independence mode, continue to know the cost of everything but the value of nothing.

It is time that the proponents in defence of our cultural heritage ie: the Ministry of Tourism & Culture, The National Trust, the Willie Redhead Foundation, Citizens in Defence of Grenada’s Lands and Heritage, the Cultural Foundation, the St. Patrick’s Development Organization, the St. Andrews Development Foundation, SADO, the St. John’s Development Committee,  The Carriacou Historical Society and others, join in lobbying for the formulating and enactment of legislation in the interest of preserving our  National Identity and Grenada’s autonomy as a sovereign nation, in order to halt the inevitable spiral into the backward mode of regression.