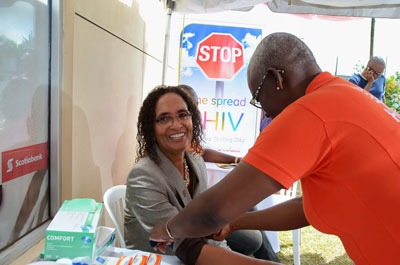 This story was posted 9 years ago
in Health
3 min. read

Friday 28 June 2013 will be the sixth anniversary of Regional HIV Testing Day in Grenada and other Caribbean territories which will result in thousands using the opportunity to know their HIV status.

Dr Jessie Henry, Director of the National Infectious Disease Control Unit (NIDCU) says that knowing one’s HIV status can make a big difference in one’s life. “Having a positive status no longer means you are going to die immediately; what it means is starting a new life and committing yourself to that new life,” she said.

Explaining that a positive status means different things to different people, Dr Henry said that when a one is diagnoses as positive, the next step is knowing the person’s Viral Load and CD4 count. “These two things are very important because it assists the healthcare team to decide the best treatment plan. Low CD 4 count, like under 350, usually means the immediate start of medication; while a high CD4 may not result in immediate treatment,” she said, while pointing out that every case is different and other things are usually considered when the decision is made to start treatment.

Reinforcing the need for all sexually activity persons to know their HIV status, she said that in Grenada more women are aware about their status compared to men. Dr Henry is concerned that men are not as eager to know their own status. “What we find happening is that by the time most men are diagnosed, they are sick and hospitalised; however if they knew their status early then the relevant intervention will be done,” she said. She is hoping that more and more males will come out and make use of the opportunity this Friday 28 June 2013 at the three testing sites which are Scotiabank branches in Grenville, Grand Anse and St George’s.

In Grenada, all pregnant women seeking prenatal care are encouraged to know their own status as part of the Mother to Child prevention programme. Over the years the programme has proven to be every effective — according to the last UN report, Grenada recorded zero deaths of infants born to HIV mothers.

The United Nations Programme on AIDS (UNAIDS) states that although the Caribbean accounts for a relatively small share of the global epidemic, its HIV prevalence among adults is about 1.0% which is higher than in all other regions outside sub-Saharan Africa. UNAIDS says unprotected sex between men and women — especially paid sex — is believed to be the main mode of HIV transmission in the Caribbean.

NOW Grenada is not responsible for the opinions, statements or media content presented by contributors. In case of abuse, click here to report.
Tags: aidscbmphealthhivlinda strakerpan capscotiastatustest
Next Post