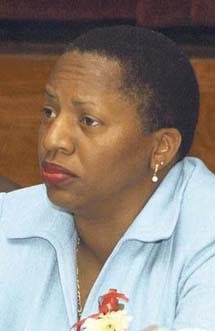 Women in leadership positions, as well as some striving to become leaders, are expected to participate in a two day symposium organised by the Grenada National Organisation of Women and two other regional leadership institutions this weekend.

GNOW in collaboration with UNWomen, Caribbean Institute for Women in Leadership (CIWIL), and Institute of Gender and Development Studies (IDGS) will be having a symposium on “Advancing Women’s Transformational Leadership Training for Gender Justice in the Caribbean” will this Friday and Saturday at the Marryshow House.

It is the second and final part of the regional project to support women’s equal participation in politics and decision-making in Grenada. According to Lorice Pascal, Project Coordinator at GNOW, sessions will focus on a number of areas.

One of the most important session will be entitled “Women in politics: The heart of the matter” and it will be concluded by the Hon Penny Beckles of the Trinidad Parliament,” she adds.

Pascal said that symposium is targeting women already in political leadership, governance within the political parties and civil society organisation. “The primary goal will be to build political will and commitment to increase the number of women in politics. Training and mentoring are likewise in-built components towards the effective coordination and networking between the political parties and women’s organisation, and the commitment to equitable policymaking and governance are ultimate end goals of this symposium” she said.

NOW Grenada is not responsible for the opinions, statements or media content presented by contributors. In case of abuse, click here to report.
Tags: becklesgnowleaderpennypolicypoliticswomen
Next Post