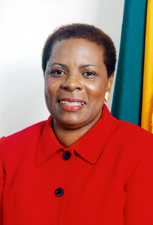 Parliamentary Secretary for Culture, Senator Brenda has reconfirmed that activities for SpiceMas 2014 will be launched in May 2014 instead of the first week in June as was done for the past four years.

The early launch is part of the strategy to increase the number of activities which can be labeled as SpiceMas events, as the island prepares to host the 2014 Carnival celebrations. The announcement of an early launch was first made during the Upper House debate of the 2014 budget which was held in late December 2013.

Hood said 2014 is of significant to Grenada as it is the 40th Anniversary of Independence, and all national festivals will be reflective of the 40th Independence Celebrations. “Following SpiceMas 2013, the board of the Corporation held discussions with various stakeholders, and recommendations were provided for improvement. The plan is now for us to implement some of those decisions as we want to ensure that carnival celebrations becomes a better and improve product,” she said.

A new chairman was also appointed to the Board of the SpiceMas Corporation following the resignation of Arthur Hosten who now resides outside of Grenada. The person replacing Hosten is Alister Bain who was the Deputy Chairman while Hosten was the Chairman.

The SpiceMas Corporation is governed by an act of Parliament which provides for the Corporation to be a statutory body under the supervision of the Ministry of Culture. It’s main function is to organise, promote, conduct and control the management of carnival in conjunction any other company or corporation.