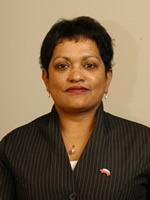 GBA Statement Regarding The Murder Of Dana Seetahal SC

GBA Statement Regarding The Murder Of Dana Seetahal SC

We received the tragic and shocking report that Seetahal was gunned down in the wee hours of Sunday morning (4 May), just after midnight, at Woodbrook, Trinidad, while driving home. Death was swift, cold-blooded and brutal.

Seetahal’s killing weighs heavily not only on the people of Trinidad & Tobago but also on the wider Caribbean. She groomed hundreds of lawyers throughout the region, including several Grenadian attorneys, with her well-prepared lectures and lively tutorials at the Hugh Wooding Law School (HWLS), particularly in the area of Criminal Law and Procedure. Focused, disciplined, thorough and intellectually sharp, she possessed a unique ability to command the attention and respect of her students.

Seetahal was a prolific writer who engaged in consistent public legal education over the years through her widely read newspaper columns in Trinidad, crafted in simple, easy-reading style. She held fiercely independent views and expressed them freely and fearlessly. She readily responded to questions from the media on a myriad of issues touching and concerning the legal profession and the administration of justice.

In 2006, Seetahal readily accepted an invitation from the GBA and delivered a thought provoking 9th Sir Archibald Nedd Memorial Lecture on the topic “Separation of Powers and Integrity in Public Life – Lessons from the Trinidad & Tobago experience”.

She ranked among the experts in the region in the field of criminal practice and procedure. Her expertise shone, not only in the classroom and courtroom, but also as the distinguished author of the 2001 publication, Commonwealth Caribbean Criminal Practice and Procedure – the first book of its kind in the Commonwealth Caribbean on criminal procedure.

We urge the State of Trinidad & Tobago to leave no stone unturned to ensure that the perpetrators of this dastardly and cowardly act are brought to justice. We further urge our colleagues of the Trinidad & Tobago Bar to remain steadfast in discharging their professional responsibilities, promoting the administration of justice in the interest of the people, and defending the rule of law.

We extend deepest condolences to the family and loved ones of Dana in this extremely difficult period. Keep strong.

Thank you Dana, for your profound contribution to Caribbean Jurisprudence; for the clarity and guidance you provided in the development of criminal practice and procedure; for moulding and shaping so many Caribbean lawyers; for fearlessly raising your voice in defence of the independence of the judiciary and the rule of law; and for so selflessly contributing to public legal education.

We must continue the legacy of Dana by standing up, speaking out, and always endeavouring to make a positive difference to society.

We shall forever cherish her memory. May she rest in peace.

NOW Grenada is not responsible for the opinions, statements or media content presented by contributors. In case of abuse, click here to report.
Tags: attorneygbalawneddseetahal
Next Post