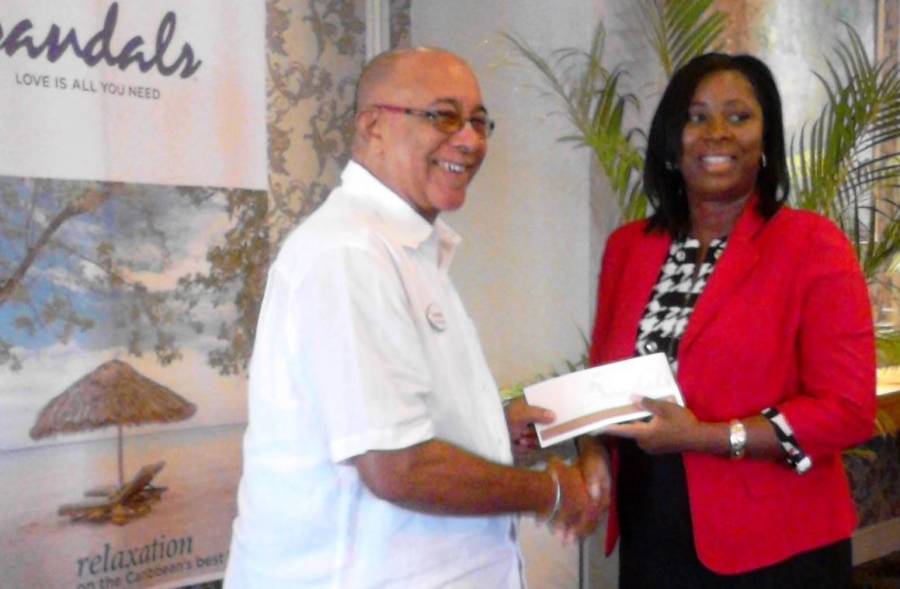 Sports Minister Emmalin Pierre believes that Grenada’s hosting of the opening games for the Caribbean Premiere League (CPL), will bring about a level of marketing for the island’s tourism product that the island will never be able to achieve on any single day.

“What we are going to achieve singlehandedly on that day, the country will never be able to pay for this. We cannot afford to pay for this. The island and its facility will be on show for the entire world. Think about the millions in India and South Africa who will be watching,” Pierre said on Thursday during a ceremony in which Sandals presented the Government of Grenada with EC$135,000 to contribute to the cost of Grenada acquiring the rights to host the opening games which will be held 11–12 July.

“It’s opening a barrage of opportunities. The games will be exposing our young people to the many opportunities that are available through sports,” she added.

Speaking about the immediate impact on the country, Pierre said that hotel rooms will be occupied as there will be beds on heads during the traditional slow and low season. “The officials alone will the filling two of our biggest hotels, plus the teams and others who are coming just for the events on those two days,” she said.

“The entire country stands to benefit from this. The marketing opportunities will just be magnificent,” she said, reiterating that tourism and sports can create a partnership that will bring huge benefits to both the public and private sectors.

The sports minister said that though government has being criticised for pursuing the hosting of the games, she believes that it will bring untold benefits to the island immediately and in the future. “When we took the decision, we did not even know where the money was coming from to pay, but we look at the bigger picture and we firmly believe that this can only be in the good for the country,” she said.

Peter Fraser, General Manager of Sandals LaSource, presented the cheque to the minister. He said that Chairman Butch Stewart was extremely proud to be associated with the games, as cricket is one thing that unifies and brings the Caribbean people together.

It will cost the government US$500,000 to host the games. Government is raising the funds through various partners, of which the National Lotteries Authority has already contributed US$250,000.