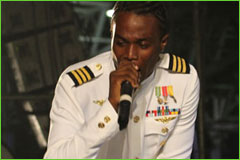 Groovy Semi and Tent Clash will be this week at Carnival City. Hundreds of patrons are expected to gather on Wednesday night for the Spicemas Corporation (SMC) Monarch semi final competition, and on Thursday night for the clash of the two tents.

Thirty three artistes including two former Groovy Monarchs are competing to be among the 15 who will be selected to dethrone Blackadan – the reigning Groovy Monarch. In order of appearance for the show are:

Calypsonians from King Man Calypso Tent and Kaiso Bards will on Thursday night clash at Carnival city as they come together to perform on the same stage for a captive audience. Some of the names expected to perform on the night are former kings Ajamu, Scholar and Wizard, as well as finalists to the DiMarche Gras stage, such as Mr X, Persuader and Sour Serpent.

“Both tents have a number of big guns as we call them, with good social and political commentaries so patrons can expect a good show at the clash,” said a representative from Megaforce Promotion, the main promoters of Carnival City for 2014.

Carnival City is located at the car park of the Public Workers Union building on the Port Highway. In the meantime Spicemas Corporation will be holding the annual Grenlec Traditional mas competition in the town of Victoria on Saturday 26 July. The Children Carnival Frolic will be on 2 August  at the Tanteen Tennis Court.