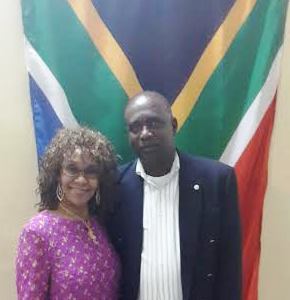 Government representatives, members of the diplomatic community and other special invited guest on Friday night gathered at the Trade Centre to celebrate “20 years of Freedom” for South Africa, because 2014 marks two decades since that country adopted a new constitution which gave each person equal rights, regardless of race or colour.

“Effectively, this marked the end of the apartheid system that for so long kept the South African nation away from its rightful and proud place in the international community,” Acting Foreign Affairs minister Oliver Joseph said during the formal ceremony of the reception which was at the Trade Centre Annex.

Reflecting on Grenada’s involvement in the process Joseph said, “In a strange way, the struggles of the freedom fighters endeared the people of South Africa to Grenadians and the rest of the World. The civilised world joined with black and white freedom fighters and insisted that apartheid in South Africa should be a pariah,” he said.

Among the guests were Judy Williams who remembered the days when Grenadians were committed to the struggles of the South African freedom fighters. “This celebration is of significance to me. I had to be here because 20 years ago I was part of group which celebrated the end of apartheid and the start of a new life for the people of South Africa. Grenada played a major and significant role in that transformation and I am very proud of what we did back then,” she said. Research has shown that during the period of 1979 to 1983 the then People’s Revolutionary Government provided more than 50 South African political figures the opportunity to be holders of Grenada’s passport. Though some of them never visited the island, that passport afforded them the opportunity to travel the world informing organisations and the world leaders about the oppression facing blacks under the apartheid system. Some of these holders included present President Jacob Zuma, former president Thabo Mbeki, Essop Pahad and other executive members of the then banned African National Congress and PAN African Congress.

Joseph said that visionaries like the late Nelson Mandela ensured that South African society could transcend the hatred of its apartheid years and usher in a new age of progress, prosperity and social justice. “As we reflect on 20 years since the end of Apartheid, it is astounding to see how much can be achieved through unity and respect for humanity,” he said.

Dr Maureen Modiselle, South Africa’s High Commissioner to Grenada, said that the people of South Africa have journeyed far since the long lines of its first democratic elections in April 1994 when South Africans of all races elected its first government. “We began to tell a new story then. We lived and renewed that story along the way. Now in 2014, we live in a country which has been remade. We have created a home where everybody feels free, yet bounded to others, where everyone embraces their free potential,” she said. “We have received the mixed legacy of inequalities in opportunities, and in where we have lived, but we have agreed to change our narrative of conquest, oppression and resistance.”

Explaining that South Africans have a new sense of themselves, the High Commissioners said that they are trying, succeeding and making mistakes, feeling oriented and disoriented through their own action, affirming some realities and denying others, eager to live together, yet finding it difficult to recognise shared burdens.

“Our new story is open ended, with temporary destinations, only for new paths to open up once more. It is a story of unfolding learning, in this story we always arrive and depart. We know what we do and how we do it, is as important as what we want to achieve,” she said affirming that South African are Africans who are actually aware of the world and are deeply implicated in their past and present.

NOW Grenada is not responsible for the opinions, statements or media content presented by contributors. In case of abuse, click here to report.
Tags: apartheidlinda strakerpassportprgsouth africa
Next Post

What Next To Celebrate!!!