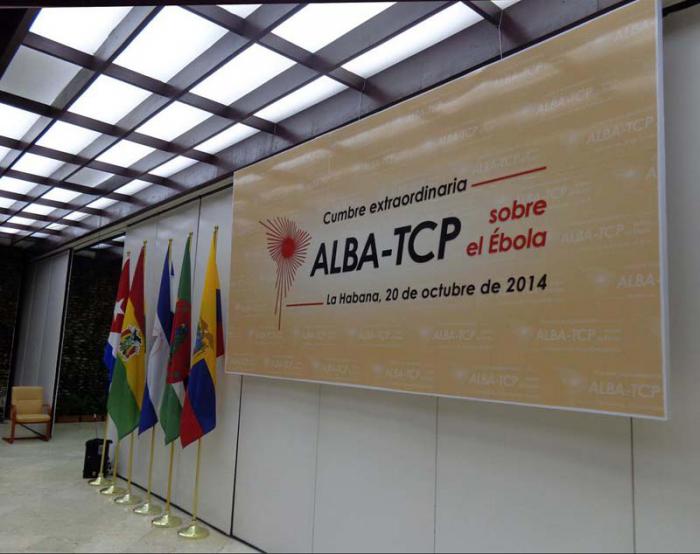 This story was posted 8 years ago
in Health
5 min. read

A Declaration of the Extraordinary ALBA-TCP Summit on Ebola, hosted today in Havana, Cuba, has been issued.

“The member countries of the Bolivarian Alliance for the Peoples of Our America–Peoples’ Trade Agreement (ALBA-TCP in its Spanish acronym), meeting in Havana on 20 October 2014, on the occasion of the Extraordinary Summit to deal with the Ebola epidemic:-

Profoundly concerned about the humanitarian catastrophe in West Africa caused by the Ebola epidemic which has been considered by the World Health Organization (WHO) to be a “public health emergency” of international concern, with the threat of spreading to other countries and regions of the world.

Aware of the urgency with which the international community as a whole, in full cooperation with the World Health Organization (WHO), the Pan American Health Organization (PAHO) and the United Nations Mission for Ebola Emergency Response (UNMEER) is undertaking actions to deal with this scourge using all necessary resources.

Clearly understanding with concern that the international resources required in order to undertake rapid and efficacious actions to deal with the Ebola epidemic are continuing to be insufficient to confront what could become one of the most serious pandemics in the history of humanity.

Reaffirming that ALBA-TCP is sustained on principles of solidarity, true cooperation and complementarity among our countries, and commitment for the most vulnerable peoples and to the preservation of life on this planet.

Convinced that it is vital to adopt efficacious and urgent cooperation measures that, through coordinated actions of the health sector and other sectors, would contribute to prevent the Ebola epidemic from spreading to the countries of our hemisphere.

Remembering stipulations established in the International Health Regulation (2005) and in the WHO Roadmap for Response to Ebola on 28 August 2014 whose aim is to stop transmission of Ebola on a global scale and to confront the consequences of any new international spread.

Taking note of WHO protocols for the prevention of transmission of Ebola among persons, organizations and population groups.

Underlining that it is possible to contain the Ebola outbreak, especially by applying the established interventions in matters of health and safety and other preventative measures that have demonstrated their efficacy.

NOW Grenada is not responsible for the opinions, statements or media content presented by contributors. In case of abuse, click here to report.
Tags: albadeclarationEbolasummittcp
Next Post