It seems that a significant number of writers in our local newspapers, indulge in emotionalism rather than rationality. However it is quite possible that this phenomenon does not arise as a consequence of the intention of these writers. Some of them may have unconsciously locked themselves into a certain mind-set from which they cannot easily extricate themselves. This phenomenon also extends to other individuals on various talk shows in Grenada. Emotionalism refers to a blind attachment to an idea, a philosophy or an influential group. Rationality refers to the process of evaluation or analysis which is expected to be highly objective, logical and independent of emotions, personal feelings or any kind of instincts.

Besides indulging in emotionalism some may even take it a notch higher where the facts are conveniently misrepresented in order to feed their emotions. For example at the last National Consultation on Constitution Reform (NCCR) which was held at the Grenada Trade Centre on Wednesday 15th October last I made a presentation on “The Significance of the Constitution.” During my presentation I made it my duty to point out that Constitution Review is the process of examining a constitution with the aid of consultations with the general public for the purpose of making certain recommendations to government.

Lo and behold! One writer, my former student, Terrence Moore wrote in the 24 October 2014 issue of a local newspaper that “when asked what was the purpose of the 3 Constitutional reviews, Dr Larry Joseph simply said “to make changes” to the constitution.” He therefore surmised that “such an answer (was) very simplistic.” Had he listened intently to my presentation, this writer would never have misrepresented me as being simplistic with my response without more being added. Whilst I did not agree with the rest of his article, I recognise that it is his right to take the stance that he did, despite the emotionalism. However I abhor the misrepresentation.

Sad to say I am most disappointed with some of the writings of attorney at law Lloyd Noel, a regular columnist in one of the local weeklies. In the 3 October 2014 publication, this writer states that with the upcoming referendum “we could be seeing a brand new package, in the form of a Republican Constitution with our President for Life, and the break-away from the Commonwealth, the Queen in England and the Privy Council.” Similar tones were also expressed by him in both the publications of 17 and 24 October 2014 respectively.

It is to be noted that none of the twelve recommendations which were made to government by the Alexis constitution review committee during the month of July 2014 included anything to do with changing from a Monarchical system to a Republican one or with breaking away from the Commonwealth or from the Queen. Neither did the six proposals (as distinct from recommendations) coming from the main opposition party contain any of these elements. These ideas are merely figments of the imagination of Lloyd Noel himself. They are merely emotional expressions which are completely devoid of rationality. Notwithstanding, he inadvertently got it correct concerning the idea for Grenada to accede to the Caribbean Court of Justice as the final Court of Appeal instead of the Privy Council.

Lloyd Noel has already expressed his disagreement with the move for Grenada to debunk the Privy Council and accede to the CCJ. It is his right to do so. However is his disagreement based upon emotionalism or upon rationality? It is my understanding that in the past, as defence counsel he represented convicted persons who were charged with criminal offences at the level of the Privy Council. In fact in many of these kinds of cases a number of human rights commissions do assist convicts to the extent where they do not have to bear any financial burden. Whether these human rights commissions would continue to do the same for convicts making appeals to the CCJ is not clear. The question therefore arises: Is Lloyd Noel’s support for the Privy Council based upon emotionalism or upon rationality?

NOW Grenada is not responsible for the opinions, statements or media content presented by contributors. In case of abuse, click here to report.
Tags: ccjcourtemotionalismjustieprivy councilrationality
Next Post 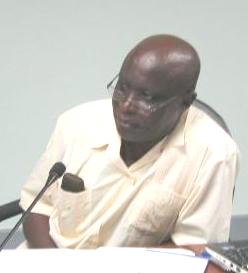