Canadian citizen Michael David who was preparing to depart following a seven-day vacation will instead appear in Court on Thursday 15 January 2015, on drug-related charges.

At the time of his arrest, the 40-year-old, was awaiting an outbound flight to Canada. Head of the Drug Squad, Superintendent Rodriquez James, said that a routine luggage search revealed that his luggage contained the substance which appeared to be cocaine in a hidden compartment. When weighed the quantity was 10 pounds.

James said that in Grenada that quantity of drugs is valued at EC$450,000. Davis is charged with trafficking and possession of a controlled drug. The maximum penalty for such an offense is EC$500,000 or up to 20 years imprisonment at the Richmond Hill Prison.

Meanwhile, Police report that a man is charged in death of a visiting Syrian who was riding a motor scooter, and succumbed to his injuries as a result of sustained injuries in a road accident.

Dead is 22-year old George Saad of L’ance aux Épines, St George, whose motor scooter collided with a vehicle at the Limes–Grand Anse main road intersection at approximately 8 pm on Friday, 8 January. Fabian Jack, 54-year old resident of Grand Anse, St George, has since been charged with causing death by reckless driving. He has been granted bail in the sum of twenty thousand dollars with two sureties.

NOW Grenada is not responsible for the opinions, statements or media content presented by contributors. In case of abuse, click here to report.
Tags: airportcanadacocainedrugfabian jackgeorge saadmichael davidrodriquez james
Next Post 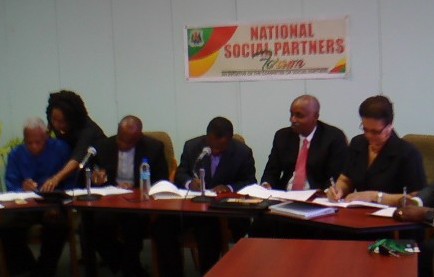