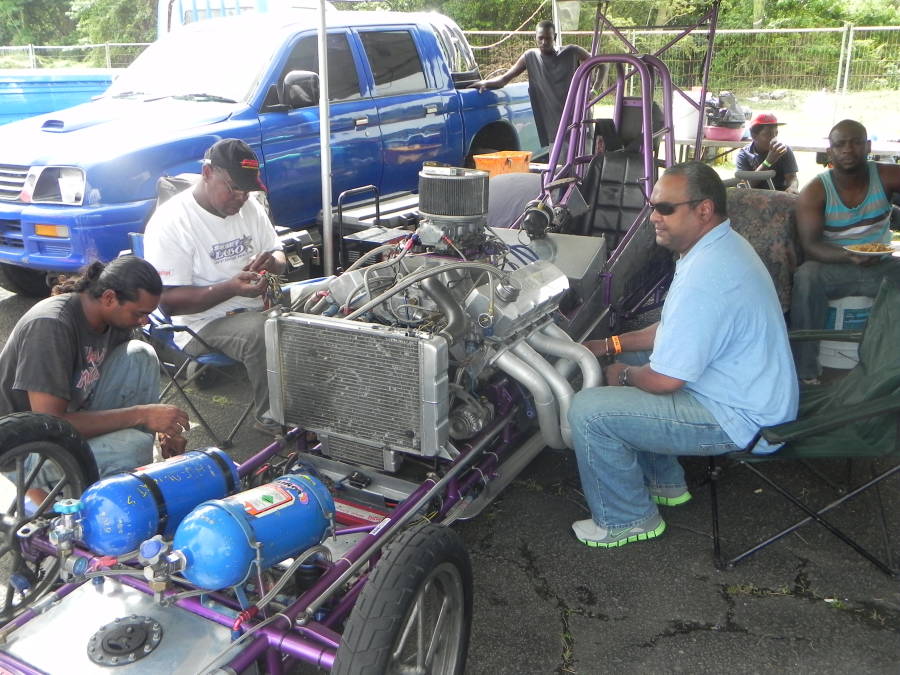 This story was posted 7 years ago
in Sports
3 min. read

Over the last 50 years, Drag Racing has increasingly become more organized. Due to its popularity it has developed into one of the most popular sports in the US and is an established sport across the world.

St Augustine’s Medical Services (SAMS) — whose owner, Dr Lutz Amechi is a keen supporter of sports and various sporting activities — partnered with GMC once again to promote safety at the event. Additionally, SAMS stationed their newly upgraded ambulance on site at Pearls, should any of the drivers encounter any difficulty or injury whilst racing.

Dr Amechi commented on his Company’s commitment to sponsorship for GMC’s Invitational Drag Racing Competition and safety surrounding the sport. “SAMS has partnered with GMC hosting several drag racing tournaments for a number of years. Drag racing, like some other sports, carry an element of risk for the participants. We always encourage that the drivers wear the appropriate protective gear and stay within the limits of their skill. Our Company plays an active role in keeping the sport as safe and enjoyable as possible, by being onsite in the event quick emergency response is needed” he said.

This year’s event saw competitors from neighbouring Trinidad, St Maarten, Anguilla and Grenada. At the close of Sunday’s races, it was Hollister “Flambo” Edwards from Trinidad who walked away with the championship title for best overall time of 8.4 seconds in the open class (9.0 seconds class and lower). It was Grenada’s racers however, that secured first place positions in the other categories: Champ Maitland captured first in the 9.0–10.5 second race category with the best time of 9.5 seconds; Kem Thomas placed first in the 12 second class with 12.1 seconds; Delroy Chasteau had the best time of 13.7 in the 14 second class; Nicholas Cherman placed first in the 15 second bracket with 15.0 seconds; and Ian Morain had the best time of 11.1 seconds for the motorcycle class.

Dr Amechi congratulated the GMC on once again hosting another successful competition “SAMS is pleased to be a part of this sport in Grenada. We would like to congratulate the GMC for providing an outlet for drivers and other individuals who share a love for the sport to do so safely, in an organized setting” he noted.

Ian DaBreo, Coordinator of the Invitational Drag Racing Competition, thanked sponsors for their continued support in making the event successful and attractive for participants. “Our sponsors make this event possible each year by contributing much needed resources. As a lover of the sport myself, we have strategically partnered with St Augustine’s Medical Services each year to further ensure the safety of our racers” he commented.

“The GMC-organized Invitational Drag Racing event gives drivers the opportunity to meet other racers. They gain knowledge and experience about the sport as well as mechanical skills which can become assets to their livelihoods.” He further stated.

After this successful and incident free event, the GMC is currently making plans for the next Invitational Drag Racing Competition which will be held at the end of September 2015. St Augustine’s Medical Services has once again committed their resources in the hosting of the next event.

NOW Grenada is not responsible for the opinions, statements or media content presented by contributors. In case of abuse, click here to report.
Tags: airportairstripcardrag racinggmcinvitationalmotorpearlssamsst andrew
Next Post