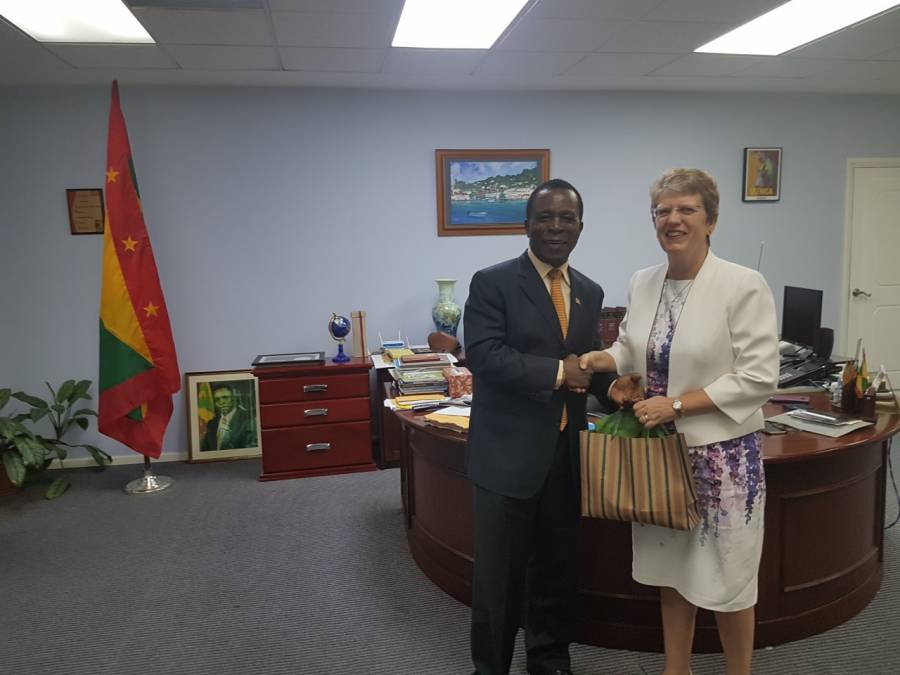 The United Kingdom’s new High Commissioner to Barbados and the Eastern Caribbean has promised the incoming chair of Caricom that she will raise with her superiors in London, a lingering issue that has implications for the security of Caribbean leaders visiting the UK. Her Excellency Janet Douglas, 7 weeks into her new assignment, made the promise to Prime Minister Dr Keith Mitchell during a courtesy call at his office on Friday morning.

Her Excellency was responding to concerns raised again by the Prime Minister about the lack of protocol and security for Prime Ministers or Governors General from the Caribbean in the UK. Top government officials and diplomats from the UK visiting the region are given priority protocol and security which include VIP treatment and police outriders.

During the meeting, Dr Mitchell pointed out that the UK Should not be citing cost as a factor preventing them from providing protocol and security for visiting Caribbean leaders, since there is no price tag on people’s lives, especially in this time of terrorism.

The UK’s new High Commissioner told the Prime Minister that she has heard the same complaint from several leaders. She explained that the issue is run by bureaucracy in London and that she will report accordingly.

“So many regional leaders studied in the British system, so we should not lose that connection,” Mitchell told High Commissioner Douglas. “Especially now that UK’s immigration policies are shifting and it is becoming more and more difficult for students to access UK education.”

Douglas conceded that Britain was losing out to countries like China which have been increasing scholarships to Caribbean students. She promised to push the scholarship agenda while referencing Britain’s Chevening Scholarship to the region which she agreed was not sufficient.

The High Commissioner stated one of the main objectives for her 4-year tenure is to ensure that Britain’s exit from the European Union (Brexit) is done in a way that will not have negative impact on trade and development relations with the Caribbean.

Last week she met with Ambassador Irwin LaRoque, Secretary General of Caricom and the engagements will continue as the region and UK navigate the development agenda.

High Commissioner Douglas will be in Grenada for the opening of the Caricom Heads of Government summit next Tuesday evening.