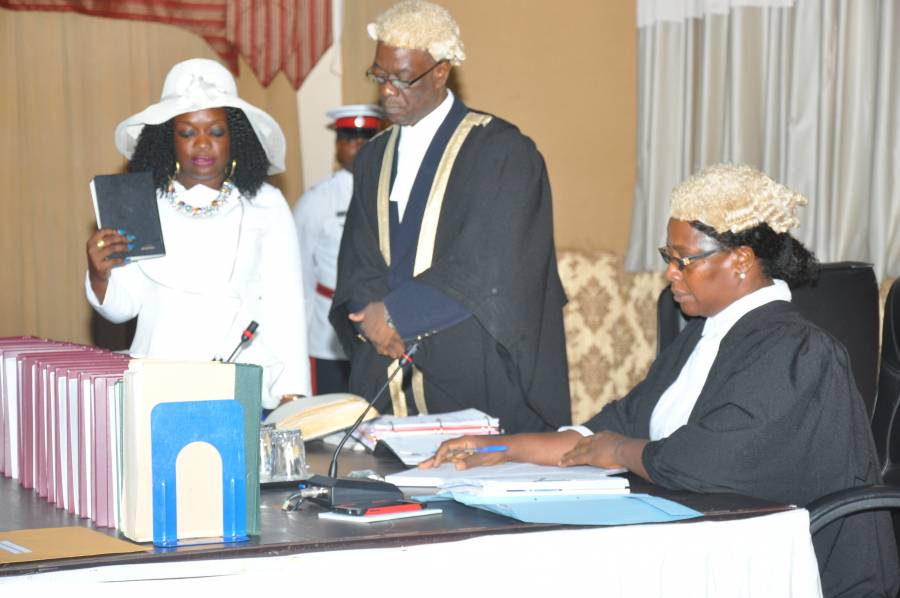 Two new senators took the oath of allegiance or affirmation when the Upper House met on Friday, 1 September 2017. Andre Lewis, President of the Grenada Trades Union Council and former teacher Kate Skeeter Lewis will officially take up senatorial duties, replacing 2 senators who are no longer serving.

Prime Minister Dr Keith Mitchell in a recent national address said that Brenda Hood who was appointed as a senator following the 2013 General Election, was retiring as a parliamentarian and that Kate Lewis would replace her.

Skeeter Lewis has been appointed as the Parliamentary Secretary in Ministry of Education and Human Resources. She will also be the caretaker for the constituency of St Andrew North East for the ruling New National Party (NNP) .

Lewis replaces Ray Roberts who has become the caretaker for the constituency of St George’s South. Roberts, representing the Labour Movement, was 1 of 3 independent senators representing stakeholder groups.

The Grenada Constitution prevents a person serving as a senator to continue serving once he/she is announced as a candidate for an election. The National Democratic Congress (NDC) has presented Roberts as its candidate for the St George’s South Constituency.

Roberts tendered his resignation to the Grenada Trades Union Council, the organisation whom he represented in the Senate. The council executive unanimously elected its president, André Lewis to become its new representative.

Grenada’s Senate or Upper House of Parliament comprises 13 members: 7 represent the ruling administration, and of the other 6, 3 represent the Opposition and 3 are representatives of the Business Community, the Farming Community and the Labour Movement.

9 bills and 1 resolution were on the order to be approved by the members.

NOW Grenada is not responsible for the opinions, statements or media content presented by contributors. In case of abuse, click here to report.
Tags: andre lewisbusinessfarmingkate skeeter lewislabourlinda strakeroppositionparliamentsenatetrades union
Next Post