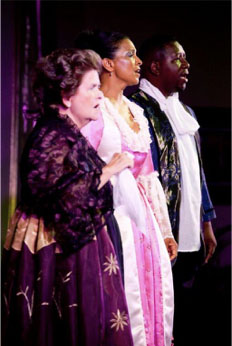 Trish Bethany, Philomena La Qua and Randal Robinson in A Night at the Opera, 2010
Share

Sunday, 3 December will see the return of great classical singers to the stage at Carols by Candlelight put on by the Rotary Club of Grenada.

Trish Bethany was singing in adult choirs by age 13, but as a low alto!  That was her ‘voice’ when she was selected for the New Jersey State High School Chorus, and when she won her graduating class’ vocal music award.  But her church choir director was stunned to find that she could sing a high C.  In exchange for voice lessons, he made her his soprano soloist.

In college, an anonymous benefactor underwrote her 4 years of voice lessons.  As a working adult she herself paid for further tutoring, until settling in Grenada a decade later (1970).  That was the end of formal training, until 2002, when Valerie Daniel returned from Germany to set up her voice studio.  Trish Bethany was 64 when she began her studies with Daniel.  The improvements in vocal technique were dramatic, and she has steadily grown under Daniel’s highly professional tutelage.  Bethany continues to train, and will do so for as long as her voice, and her teacher’s patience, allow.

During her 47 years in Grenada, Trish Bethany has sung every genre from folk to Broadway to oratorio, to operetta and, currently, grand opera.  She appears regularly with the SGU Choral, ‘Creme de la Crème’ and on Valerie Daniel’s concerts.  Earlier patrons may remember her as Yum-Yum in ‘The Mikado’ or Ado Annie in ‘Oklahoma,’ productions by the Music Society.  Newer audiences are familiar with her ‘Night At The Opera’ arias as well as regular seasonal performances of Christmas favorites like ‘O Holy Night’ which she will perform as her finale at the show.  Bethany is planning a concert in 2018 in celebration of her 80th birthday.

The Classics segment includes ballet performances of the Nutcracker by Conception Dance Theatre, while the 2nd concert is of contemporary genre with Jenny J and Friends with Soul Deep, and others performing songs of the 20th century and beyond. Both concerts are directed by award-winning Richardo Keens-Douglas.

NOW Grenada is not responsible for the opinions, statements or media content presented by contributors. In case of abuse, click here to report.
Tags: carols by candlelightoperarotarytrish bethany
Next Post