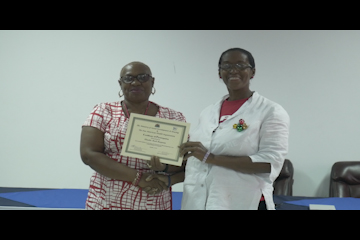 “Gender-Based Violence is now a public health issue,” said Tessa Stroude, the local representative of the Pan American Health Organisation (PAHO), in her closing remarks following 2 days of intense training on crisis intervention, and how to effectively respond to crisis situations.

Stroude said gender-based violence, if left unchecked can have a negative ripple effect on society. “It is a public health concern because it affects families, it affects communities and in turn, affects the country and it is important for us to deal with it…nip it in the bud… I mention also that it [has] always exist[ed] but I think with people becoming more empowered, that we now know more about it and we can do more to encourage people to speak out.”

The workshop focused on gender-based violence issues, as well as issues of suicide, mental illness, and natural disaster response.

Workshop facilitator Laurel Victor said, “These participants are considered the first responders and as such must be able to properly manage any crisis situation.” Victor said another critical aspect of this training was to equip participants with necessary skills to debrief after a crisis situation has been resolved. “We can be burdened by hearing people’s stories that are sometimes traumatic, so it is absolutely essential that we take care of ourselves — we need to debrief after hearing the stories; that is part of our self-care.”

NOW Grenada is not responsible for the opinions, statements or media content presented by contributors. In case of abuse, click here to report.
Tags: crisis interventioncurlan campbellgender based violenceministry of social developmentpahopan american health organisationpublic healthrgpf
Next Post

Taxes Due for December 2017