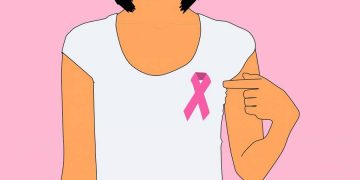 This story was posted 4 years ago
in Health, Video
4 min. read
Share

Eating healthy and getting regular exercise has been the daily routine for retired secondary school teacher Paulette Calliste of Mt Moritz. An unexpected diagnosis in 2009 changed her life completely and has led her on the path to becoming an advocate for cancer survivors in Grenada.

World Cancer Day is recognised on 4 February. NOW Grenada sought voices of cancer survivors to inspire others. Several known cancer survivors were approached but declined to be interviewed. Calliste who is originally from Yorkshire, England has been living in Grenada for 27 years. She taught at the Happy Hill Secondary School for 14 years before retiring. She was more than happy to share her struggles with breast cancer hoping that her story can encourage both women and men to get regular screenings.

She recounted her reaction when first discovering a lump on her right breast in 2009. “I felt a little lump in my right breast, so I told my husband. At the time he was very ill, we had to go to Trinidad to get his kidney stones removed and when I came back I made my annual check with my doctor and she asked me how long did I have this? I said I think May or June of 2009. She was a bit upset with me… I had my ultrasound and mammogram. I think I was in denial because I keep fit, I don’t smoke, I don’t drink, am vegetarian. I walk and swim every day and I was quite shocked. Why me?”

Upon coming to the reality that she did, in fact, have breast cancer, Calliste travelled to the UK to have the lump removed. She had to endure a 5-hour reconstructive surgery operation to have the cancer removed. “Someone asked me in the hospital why am I so cheerful? I said I am glad that it was removed…you got to be in a positive state of mind. I had other friends who had cancer since then and they asked for advice. I was very lucky I didn’t have chemo and radiation therapy which can be quite debilitating.”

Calliste is now actively involved in the Pink Ribbon Society, an organisation that helps promote breast cancer awareness. She said in Grenada cancer survivors often stay in the shadows and refuse to let their voices be heard. This she said is a challenge in the fight against breast cancer. “I have been asked by our president to go and speak with women and it’s very interesting the reaction you will get. People don’t want to know; some of them don’t want to discuss it. I think they want to hide things and I don’t understand that.”

Calliste is encouraging women to have regular screening for cancer early, as records show that 2016 recorded the highest number of people dying from breast cancer as compared to the past 15 years.

Speaking with NOW Grenada, Senior Medical Officer Dr Sonia Nixon said the ministry is concerned at the number of cancer related deaths affecting our people and has designated February as Cancer Awareness Month.

A team led by Dr Nixon, comprising officials from the Ministry of Health, Grenada Cancer Society, a representative from the Grenada Media Workers Association and non-governmental organisations, is presently planning an aggressive campaign to engage the population during February, geared towards encouraging more people, including men, to get screened for cancer.

Breast, cervical and prostate cancers are the most common cancers affecting Grenadians. A series of activities aimed at education about and screening for these cancers are being planned by the ministry. Nixon said detecting cancer early almost always makes it easier to treat or even cure, while increasing awareness of signs and symptoms and the importance of timely treatment have been shown to improve survival from cancer.

Screening for Major Cancers in Grenada