This story was posted 3 years ago
in Business, PRESS RELEASE
5 min. read

by Kimberly Waithe and Shamar Blenman

To say that the Caribbean has faced challenging developments particularly in the last decade is an understatement. Despite this, the income of the average person in the Organisation of Eastern Caribbean States (OECS) sub-region has grown 3 times faster than the average income of individuals across Latin America.

This is found in Together for Prosperity in the OECS, a new publication by the Inter-American Development Bank (IDB), which maps external developments and domestic policies that have shaped development outcomes in the Eastern Caribbean during the past decade.

Together for Prosperity in the OECS notes that despite high public debt, OECS member states have the potential to achieve fiscal sustainability. Indeed, by cooperating under a common institutional framework and pooling their resources, the 6 independent nations have achieved growth and development that would not have been possible by each country going it alone.

Through the policy framework of the Eastern Caribbean Central Bank (ECCB), the exchange rate has been maintained at US$1 to EC$2.70 and inflation has been kept relatively low and stable in a decade that saw one of the worst economic crises in history.

The ECCB also helped to maintain financial sector stability, staving off a series of challenging developments during the past decade. Substantial non-performing loans accumulated after 2009, which had an especially significant impact on the performance of indigenous commercial banks. Later, there was the collapse of the Stanford Group, which triggered significant withdrawals of deposits from its locally incorporated subsidiary, the Bank of Antigua (BOA). The ECCB responded by assuming control of the BOA, and by strengthening its regulatory and supervisory framework of the commercial banking sector.

Social advances were also achieved through significant public investments by the various OECS governments. The Eastern Caribbean governments made greater progress in child health with lower infant mortality rates than comparable small island developing states. For example, in 2015, infant mortality rates in Antigua and Barbuda and St Kitts and Nevis were less than 10 per 1,000 live births, whereas the average for the rest of small economies of the world was over 25 per 1,000 live births. In education, free access to compulsory primary and secondary education in the OECS nations has resulted in gross enrollment rates that are today nearly 100%.

Notwithstanding these notable achievements, the development of the various OECS nations has been tested by a challenging environment.

These island states underwent a fundamental structural transition from agriculture and manufacturing in the 1980s towards tourism and financial services in the 1990s and the 2000s. Tourism is now the main driver of growth and employment across the OECS. However, reliance on a few tourism source markets, such as North America and Europe, made OECS member states particularly vulnerable to external economic developments.

Frequent natural disasters also took a toll on the OECS nations. Between 2004 and 2016, the OECS suffered US$1.6 billion in total damages to property, crops and livestock. Grenada was severely damaged by Hurricane Ivan in 2004; Dominica’s economy and infrastructure were devastated by Tropical Storm Ericka in 2015 and Hurricane Maria in September 2017.

International reserves were pressured towards minimum levels of import coverage. The underperformance of the tourism sector and the countries’ heavy reliance on imports contributed to wider trade balances. IDB’s research in Together for Prosperity in the OECS shows that there is an inseparable linkage between the fiscal crisis confronting the OECS nations and the reality of paying some of the world’s highest per capita energy costs. The countries in the region are burdened with the need to import increasingly expensive oil products for transportation and electricity generation. Covering the ever-increasing cost of energy places enormous pressure on countries whose national budgets are already heavily indebted.

Governments resorted to fiscal stimulus in the wake of the 2008-2009 economic crisis, while reconstruction bills following natural disasters have been largely financed by the affected governments. In the face of already constrained fiscal revenues, these expenditures were financed by public debt.

In addition, OECS countries borrowed to meet their daily expenses. Public sector wages — whether directly or through state-owned enterprises — represent the bulk of recurrent expenditures in the OECS nations. The small economic scale of these countries, the limited scope of their private sector, and the slowdown of the global economy meant that government became an employer of last resort.

Revenues from taxation were below those of other similar small island developing states and were insufficient to meet development needs in the OECS nations. However, some member countries benefited from generous non-tax revenues from their Citizenship by Investment Programmes. These revenues, however, are volatile and should be used for a ‘rainy day’ fund, rather than be incorporated into the normal expenditure functions of these governments.

Public debt in the OECS now sits uncomfortably high at an average 80% of GDP. Nonetheless, debt sustainability simulations suggest that with gradual fiscal consolidation efforts, OECS countries would be on track to meet 60% of GDP by 2030, a target set by the Eastern Caribbean Central Bank. In fact, St Kitts and Nevis and Grenada are currently on track to meet the target by 2017 and 2021 respectively, having undergone IMF Programmes following the global financial crisis.

The authors of Together for Prosperity in the OECS assess that the outlook for the region is predicated on dynamic performances from tourism and construction. Construction will be supported by public and private investment, with the latter buttressed by Citizenship by Investment(CBI) inflows. Moreover, reconstruction efforts initiated after adverse weather events are expected to be growth-positive. This uplift in economic activity is expected to provide impetus to wholesale and retail, transportation, real estate, and business activities.  At the same time, debt restructuring, and fiscal reform initiatives could set the OECS islands on a path towards fiscal sustainability over the medium term.

Together for Prosperity in the OECS: Growth, Development, and Adversity in Small Island Developing States is available for free full download here: https://publications.iadb.org/handle/11319/8570 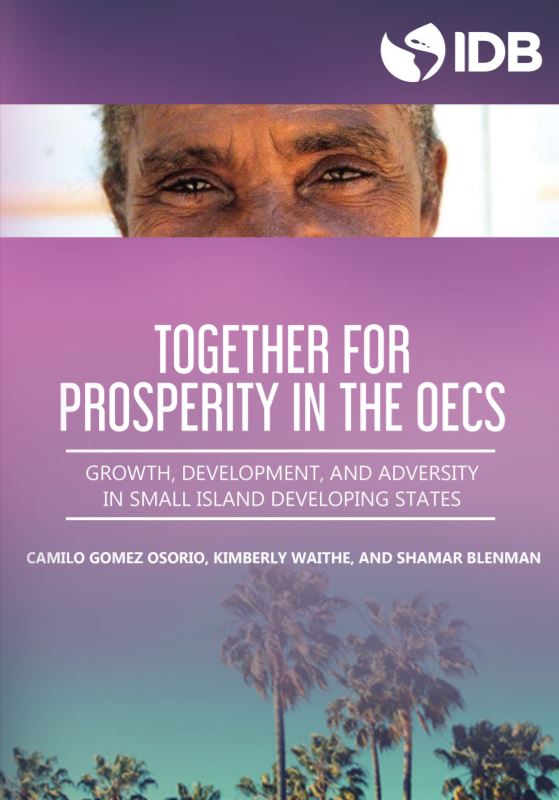