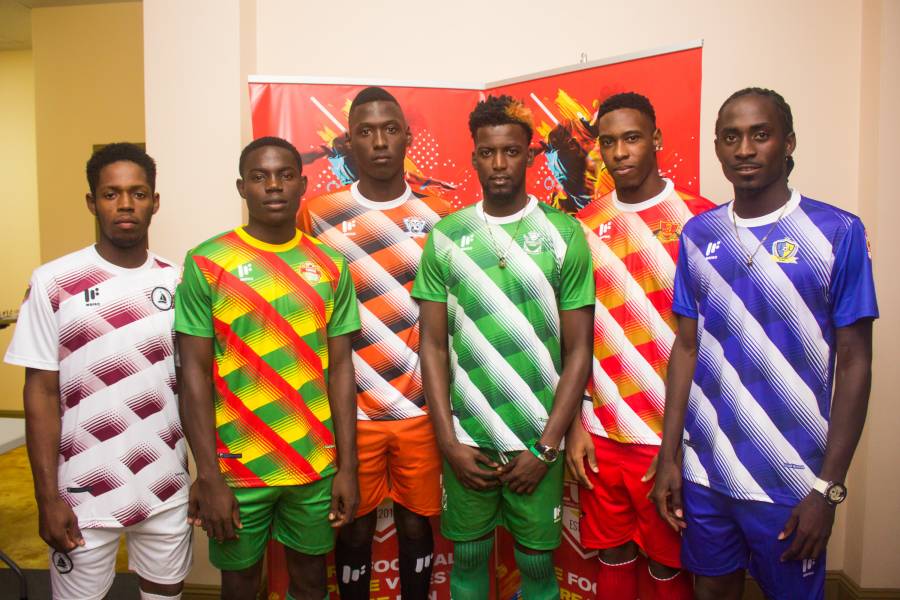 This story was posted 4 years ago
in PRESS RELEASE, Sports
2 min. read

The Pure Grenada Cup 2018 football tournament, which brings quality players in the country’s parishes on the field of play, promises to be an exciting affair.

The official launch of the tournament in a cocktail/reception style was on Friday, 23 February 2018 at the Grenada Football Association’s (GFA) Headquarters at Queens Park, St George, was a signal for what’s in store.

The 8 teams participating in the competition were formally presented and had their logos unveiled before the eager eyes of key officials associated with the event, including the Permanent Secretary in the Ministry of Sports, Kevin Andall, sponsors, the President of the GFA Cheney Joseph and other football officials and enthusiasts.

The competition is set to begin from 17 March through 5 May 2018 and matches will be at the Fond Playing Field, St Patrick; the Cuthbert Peters Park, St John; Victoria Park, Grenville, St Andrew and the Kirani James Athletics Stadium, St George.

The Pure Grenada Cup is created as a premier football event that, among other things, will seek to identify the top players for selection to Grenada’s senior men’s team, as well as to provide a medium to build on Grenada’s sports tourism product.

It will also allow fans to experience a spectacular showpiece, with only the best players from each parish on display, as well as the nation’s top Under-20 footballers in action.

Addressing the gathering at the launch, Permanent Secretary in the Ministry of Sports congratulated the GFA on its initiative and is looking forward to a keen competition.

President of the Grenada Football Association, Cheney Joseph, noted that the Pure Grenada Cup Tournament will afford coaches an opportunity to exhibit their ability as far as high-quality performance is concerned. “The Pure Grenada Cup over the next 8 weeks will also feature our best Under-20 footballers playing as a development team. Grenada has a multitude of talented players but there are not enough opportunities for these players to play at the highest level. Our goal of becoming a top 5 performer in the Caribbean and to qualify for the next CONCACAF Nations League which starts in September is mirrored by our staging of the competition at this time,” noted the GFA President.

He further stated that “as an association, we also have a national duty to offer quality competitions to our stakeholders and shareholders as well as our fans.”

The tournament is being managed by a Local Organising Committee (LOC) headed by Alvin Clouden, who believes the experience gained from staging the CONCACAF U17 two years ago is being used to create a local tournament at international standards so that all persons involved will be better prepared to function on international arena.