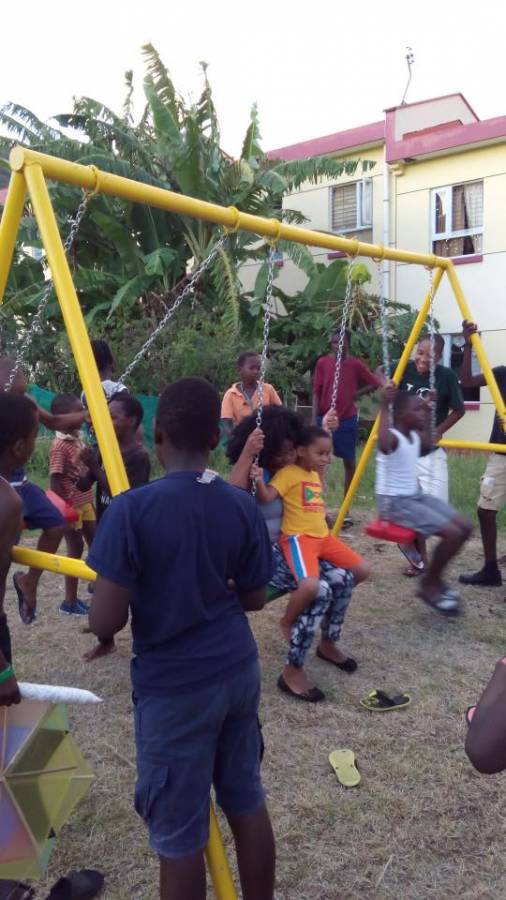 This story was posted 4 years ago
in PRESS RELEASE, Youth
4 min. read

On Thursday afternoon, the swing set erected at Mt Rush Housing Scheme was formally handed over to the parents and children of the community. The children received the swing set with great excitement and joy as there are no other recreational facilities in the development. They happily participated in the handing over by singing the national anthem, taking turns at swinging and partaking in the refreshments prepared by the parents. Some pictures are below.

For the avoidance of all doubt, in keeping with my approach of partnering with the community to get things done, I asked the residents to obtain the requisite consent to erect the swings, and I would pay for the construction and installation. On Monday I was contacted and informed that permission was granted and all that was needed of us, was to attend at the site and choose a spot. We did so on Tuesday afternoon and together with some residents, picked the spot.

On Wednesday morning the chosen spot was cleared by an employee of the Housing Authority of Grenada responsible for maintaining the grounds. This is the same authority responsible for giving permission. When the workmen were installing the swings, some NNP supporters living there, realising it was an initiative involving the NDC, apparently made some phone calls. Oswald Gilbert and Fabian Bowen, of the Peter David campaign, showed up and began objecting in the most aggressive and bullish manner. It was one of the worst displays of bullying and intimidation I have experienced during the campaign and believe me, that is one of the main tactics used by the NNP campaign in the Town of Saint George. Neither Gilbert nor Bowen are employed with the Housing Authority. However, they had enough clout to summon officials of the Housing Authority to the site and tried to pressure them into directing us to stop the installation.

Mr John of the authority spoke to me and said that as far as he knew, a written request for permission was not made. I told him of the arrangement we had with the residents for them to get the permission and us to do the rest. He said there and then, that even if the residents did not make a written request, he could not see the authority objecting to the erection of the swings. The residents said that it was the norm when they want to do anything in the development, to make an oral request and to receive oral permission and that is what happened in this case. I then assured Mr John, that if they insist, we will have the residents prepare and submit whatever letter they may need. I also told him that since the installation was almost complete, we would go ahead. The swing set was already down, and all that was left to be done was pouring the concrete mix in the holes to fasten the swing to the ground. Besides, none of us had the heart to disappoint the children who had gathered around anxiously watching the installation, except of course, Gilbert, Bowen and the handful of rowdy NNP supporters.

Freelance journalist, Calistra Farrier and mother of 2 young children, is a resident of the community. She was there and started filming when Bowen and Gilbert showed up and started venting their anger at the NDC for leading the initiative and according to Gilbert being so bold as “to paint the swing in party colours.” It was lost on him that the swings are in fact painted in the national colours.

Calistra did nothing improper or unexpected of a journalist in the situation. In fact, several people present were recording the incident. The aggression towards her was therefore inexplicable, started with Bowen and was entirely unprovoked. Bowen was then joined by Gilbert. At the moment when Calistra’s iPad was punched out of her hands, I was walking away from the group because I felt that one of those guys might physically attack me. So intense was their display of anger and frustration that it was not NNP taking the initiative!

It was only after viewing the video, I saw that part of the assault. I strongly condemn the unwarranted and violent assault on this female journalist, by both men. This was surely an attack on the free press. Gilbert took it farthest, but BOTH men assaulted Calistra. Both of them owe her an apology or should feel the weight of the law, or both.

I understand that there was a report on GBN that the swings will be removed. I have not seen the report but if it is true, then those doing the removing will have to explain their action to the children and parents of the development.

NOW Grenada is not responsible for the opinions, statements or media content presented by contributors. In case of abuse, click here to report.
Tags: bullyingcalistra farrierclaudette josephhousing schememt rushswing
Next Post