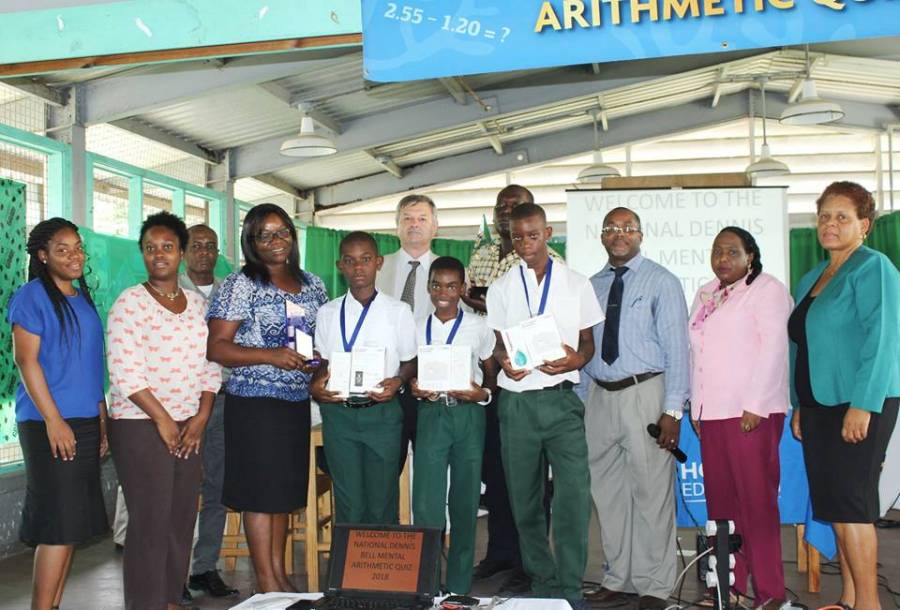 This story was posted 4 years ago
in Education, PRESS RELEASE, Youth
3 min. read

Educational District One, represented by the Hillsborough Government School, in Carriacou, won the Dennis Bell Mental Arithmetic Quiz, scoring a total of 230 points, at the finals, which were hosted at the St John’s Anglican School, in Gouyave, St John, on 27 June 2018.

Neil Morley, Sales Representative for Hodder Education, in St Lucia and Grenada, had high praise for the Hillsborough Government School. He said, “The team that won the eventual prizes – won its first position – it’s been trying for many years. Its preparation was absolutely excellent. They knew how to handle each round of questions and maximise their points from it.”

Wilson, a Grade 6 Student of Hillsborough Government School and a member of the winning team, said, “I feel real very, very proud of myself and Carriacou is always coming down here, but they’re never winning, so it was nice that we finally won.”

Wilson said their coach reminded them that whoever is ahead will remain ahead and this, he said, helped to propel them through the competition.

Alexander said much practice went into the preparation for the quiz and he is elated with the team’s performance and the final results. “I would like to thank the people of Carriacou, who’ve been supporting us 100 percent; the district team – the district maths team, led by Robert Martineau and the other teachers – they were very supportive, and we normally have extra competitions and so forth, so that gave us the extra push.”

Alexander also credits the support of the Hillsborough Government School Principal and parents, as a key factor in their success, while Deonne expressed thanks on behalf of the team. “First I would like to say thank God; thank my parents; thank the teachers; thank the principal – thank everybody who was supportive of us,” he said.

The annual event is hosted by the Ministry of Education, Human Resource Development and Religious Affairs, in collaboration with Hodder Education, who publishes one of the main math texts for primary schools in Grenada. The quiz allows students to compete in mental math activities, in an exciting and friendly manner throughout the school year and is meant to achieve better student performance in mathematics.

Morley said, “We’re very pleased to sponsor this quiz at its district and its national levels. We’ve been doing it for four years, as Hodder Education and previously as Pearson Education.”

Morley also praised the standards Grenada has established for the competition. “I am always very impressed by what I see of students’ competencies and abilities at the Maths quiz. They – all of the adults in the room – will know that they’re struggling to answer some of these questions, particularly given the time constraints that the children are under. So, it’s a very impressive event and just goes to demonstrate the quality of not just some mathematical teaching, in Grenada, but also the way they’re prepared for events like this. I think we saw that in the results today.”

Lydon Richardson, Curriculum Officer for Mathematics said, “The children are very sharp. They always impress me the way they get answers quickly – in 20 seconds.”

This competitive event consisted of four sections, which were Mental Arithmetic; Math Jeopardy; a Bonus and a Power round.

Moving forward, Morley says new elements, may be added. “There’s been discussion today about expanding the mental maths quiz into something more elaborate – more inclusive – which may include science education, as well as other aspects of mathematical education. If that is the case, it could be a significant event and one where we can showcase, say science experiments, or technology projects that are currently going on in the schools,” he said.

The Dennis Bell Mental Mathematics Quiz begins in the month of September and concludes in June, of each school year, starting at the school level, then moving to district and national level.