Police seized 281 pounds of cannabis at Levera, St Patrick on Sunday, 19 August 2018 as a result of an operation conducted by officers attached to the Drug Squad.

They appeared at Sauteurs Magistrate’s Court on Thursday, 23 August charged with trafficking in and possession of a controlled drug.

They are due to reappear in Court on Thursday, 27 September 2018.

NOW Grenada is not responsible for the opinions, statements or media content presented by contributors. In case of abuse, click here to report.
Tags: cannabisdrug squadpolice
Next Post 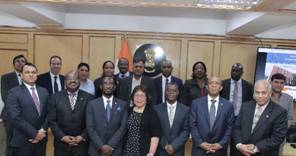