Bishop Charles remembered for his stewardship during times of crisis

Bishop Charles remembered for his stewardship during times of crisis 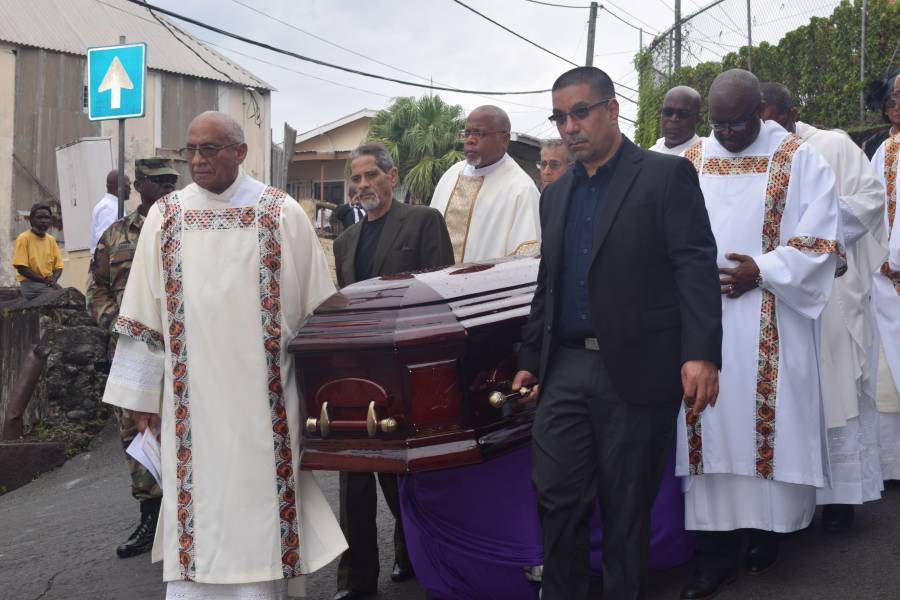 Bishop of the Diocese of St George’s Clyde Martin Harvey has described Grenada’s 3rd elected Bishop Sydney Anicetus Charles as one who kept his composure in a time of political turmoil. During the requiem mass for the former Bishop held at the Cathedral of the Immaculate Conception, Bishop Harvey in delivering the homily referred to the leadership of Bishop Charles during Grenada’s revolution which ended in a bloody coup on October 1983.

“Sydney himself faced days when he would close the doors of the presbytery and hide by himself and know the radical loneliness of the priesthood of those days. Sometimes I think we don’t understand what he endured. One day Uncle Sydney passed a book to me and he said I want you to have this and in it was a quotation and I want to share it with you. “Anyone can give up. It is the easiest thing in the world to do, but to hold it together when everybody else will understand if you fall apart, that is true strength.” And I couldn’t help thinking of the times in the early 80s when a lot of people looked at Grenada and the church and thought he would have fallen apart, but he didn’t.”

Being the 11th child of Albert and Mary Charles, Sydney Anicetus Charles was born in St Joseph Trinidad on 17 April 1926. He was first ordained as a priest on 7 March 1954.

On 18 November 1974, Monsignor Sydney Charles was named Bishop-elect of the diocese of St George’s in Grenada and was ordained its third Bishop on 26 January 1975 at the Cathedral of the Immaculate Conception. He remained in that position until his retirement in 2002.

In June 2006 Bishop Charles was honored by Her Majesty Queen Elizabeth II with the award of the Commander of the Most Excellent Order of the British Empire (CBE).

His burial mass was attended by Her Excellency Dame Cecile La Grenade, Governor General of Grenada, Prime Minister Dr Keith Mitchell, Speaker of the House of Representatives Michael Pierre and other government officials. Bishops of the Antilles Episcopal Conference and priests of the Diocese also attended his burial mass concelebrated by reciting the hymns and offering prayers during the consecration together with members of the parish.

The niece of Bishop Charles, Amanda La Caille from Trinidad, spoke with NOW Grenada about her uncle’s days on earth. “Uncle Sydney meant the world to us. He spent in his later years, most of his Christmas holidays at our home and that is what we remember fondly. Driving him around and taking him to church, I had the privilege of spending the last week with him in Grenada, so I would like to thank the Grenadian public for all the love they have given him.”

Bishop Charles was very instrumental in establishing the New Life Organisation (Newlo) which remains one of the most profound legacies of his Episcopal tenure.

Executive Director of Newlo, Sister Margaret Yamaoha described the late bishop as a visionary. “One could say that Bishop was a visionary because 34 years ago he paid a lot of attention to skills development and today we are running about 10 different programs. Newlo contributes largely to the workforce of Grenada.”

The Most Reverend Sydney Anicetus Charles body was laid to rest in the crypt next to late Bishop Vincent Darius beneath the Cathedral of the Immaculate Conception.

Sugar and spice: an explosion of Caribbean culture