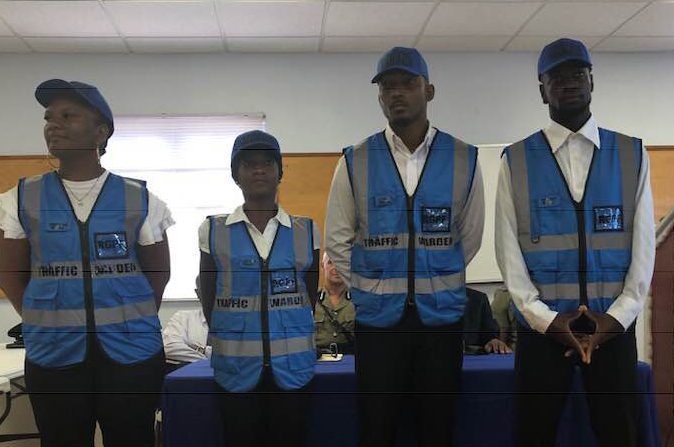 The first batch of traffic wardens goes into training

The first batch of traffic wardens goes into training

By end of February 2019, the Traffic Department of the Royal Grenada Police Force (RGPF) will be operating under a new structure, as regular police officers will no longer be responsible for the traffic duties but instead, this task will become the responsibility of traffic wardens.

The law to create traffic wardens was approved in both houses of Parliament in late 2018 and officially went into effect as of 2 January 2019. However, the first batch of wardens began an intensive 3-weeks training session on Monday, 28 January 2019 at the conference room of the Esplanade Mall.

The 60 wardens will be exposed to practical and theoretical sessions that include studying sessions of the Road Traffic Act and the Litter Abatement Act that will apply directly to their responsibility and visit magistrate courts.

“This training programme is to ensure that you are fixed for the task,” said Maureen Stanislaus, Chief Instructor of the Police Training School who explained that during the training the wardens will be working along with police officers.

Some of the other areas to be covered in the training are reporting writing; giving evidence; theory and practical in the fix penalty system; first aid skills; customer service and a brief history of Grenada.

Acting Commissioner of Police Edvin Martin, told the potential wardens that establishing the new traffic management structure is part of efforts to modernise the work of the police force. “This is in furtherance of traffic management in developing a well-supported and modern police force,” he told the participants who learned that over the past 5 years there has been more than a 50% increase in traffic on the roads.

He warned the participants about the abuse of power. “Do not use your new-found authority to be vindictive,” he said, explaining that as traffic wardens they will be in a powerful position which they should not abuse.

The traffic warden will be employed by the Ministry of Transport but working under the direction of the Commissioner of the Police. Against that background, Transport Minister Gregory Bowen said that this is the first time the Transport Department has become fully functional. The Permanent Secretary in that ministry is Willan Thompson.

ASP Linford Kingston, current head of the Traffic Department urged the participants to make use of the opportunity and the training. “I urge you to learn as much as you can, work hard and I look forward to working with you as you join us in our quest to make the roads safer,” he said.