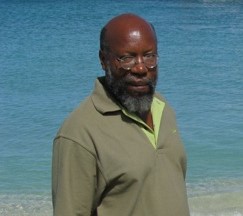 This story was posted 3 years ago
in Agriculture/Fisheries, Environment, PRESS RELEASE
4 min. read

On 31 January and 1 February 2019, the Government of Grenada and the NAP Global Network, in collaboration with the Integrated Climate Change Adaptation Strategies in Grenada (ICCAS) project, hosted a 2-day national workshop on “Scaling up adaptation: Strengthening alignment of the National Adaptation Plan (NAP) process and the Nationally Determined Contributions (NDC) in Grenada.”

This workshop targeted the Climate Change Focal Points for different ministries, statutory bodies and utility companies, but also private sector entities, CSO, and the media, and was tailored to help participants identify the synergies between the 2 policy documents, (NAP and NDC) and to Strengthen the connections between different government departments and representatives working on parallel policy processes. The overarching goal being to scale up and advance the implementation of Grenada’s adaptation needs and goals.

During her opening remark, Merina Jessamy, Permanent Secretary in the Ministry of Climate Resilience, commanded the timing of the event.’ It is very important that we have this workshop in the first quarter of the year. For the management of the process, it is very important for us we to really hit the ground in terms of implementation.”

When speaking about climate change, 2 action-words often come up: Adaptation and Mitigation. What does it mean for Grenada to adapt to and mitigate climate change?

In adapting to climate change, Grenada is taking action and implementing measures to become more resilient. These measures include, increasing storage of water through rain water harvesting, protecting coral reefs, mangroves and our coastal areas from erosion, building and maintaining drains to avoid flooding and landslides, and building strong homes which can withstand the strong hurricane winds and rain. At the national level, 12 Programmes of Action for adapting to climate change were developed and approved by Government in the National Climate Change Adaptation Plan (NAP). The NAP represents a comprehensive set of programs and actions that forms the basis for stakeholders to implement within annual work programs and also for accessing climate finance locally and internationally to make these programmes of action a reality.

Mitigating climate change, means taking actions to reduce Grenada’s emissions of greenhouse gases, which contributes to climate change. These actions include increasing the use of renewable energy in the national electricity production, reducing emissions in the transport sector by switching to low emission vehicles, generate electricity from waste, switch the cooling sector to natural refrigerant based appliances and increasing and preserving acreages under forests and natural vegetation. Grenada’s efforts to address its greenhouse gases emission is detailed in its National Determined Contribution (NDC) presented to the United Nations Framework Convention on Climate Change. Whilst Grenada’s emissions are not significant in the global context (representing less than 0.0005%), it is still important for Grenada to commit to mitigation measures because of its commitment under the climate change convention that requires it to join the global effort to keep temperatures below 1.5 degrees. This will also result in Grenada keeping pace with new and improved technologies and opportunities for accessing international funds to finance its adaptation and mitigation actions. According to Dr Spencer Thomas, one of Grenada senior climate change negotiator at the UNFCCC, “adaptation and mitigation are 2 sides of the same coin, they are complementary”.

The NAP Global Network was created in 2014 to enhance support for national adaptation planning and action through sustained peer learning and exchange, enhancing bilateral support, and promoting national-level action on the NAP process. The network’s members include participants from more than 110 countries involved in developing and implementing national adaptation plans, as well as 11 bilateral donors. The network has supported Grenada’s NAP process by engaging the government’s representatives in international peer learning events, as well providing technical assistance on monitoring and evaluation of adaptation actions. Anika Terton, project manager with NAP Global Network, said of the process that “To build the resilience of communities, ecosystems and economies to climate change threats, we need to redouble our efforts to promote international cooperation. The NAP process and NDC, as two signature vehicles under the Paris Agreement, represent a feasible starting point when thinking about the alignment of national policy process related to climate change,”

The ICCAS project is a partnership between the Government of Grenada and the German Federal Ministry for the Environment, Nature Conservation and Nuclear Safety (BMU) and is funded under BMU’s International Climate Initiative (IKI). The ICCAS project is jointly implemented by the Environment Division at the Ministry of Climate Resilience, the Environment, Forestry, Fisheries, Disaster Management and Information in collaboration with the Deutsche Gesellschaft für Internationale Zusammenarbeit (GIZ) and United Nations Development Program (UNDP).

NOW Grenada is not responsible for the opinions, statements or media content presented by contributors. In case of abuse, click here to report.
Tags: climate changegreenhouse gasesministry of climate resiliencenational determined contribution
Next Post

Minding Your Legal Affairs: Protections for the client under the Legal Profession Act 2011