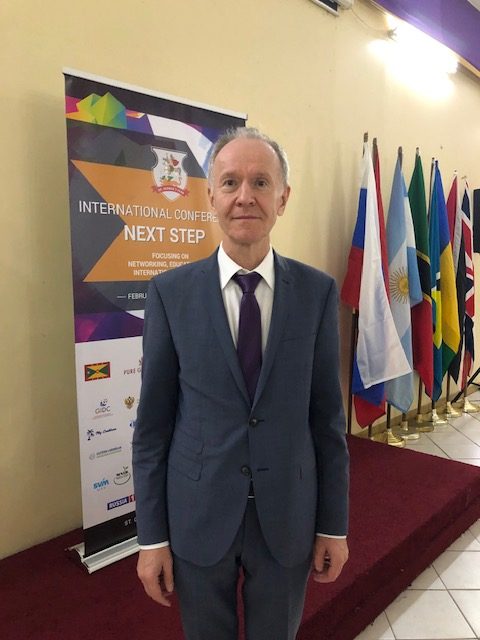 Russia’s ambassador says his country will not abandon its friends

Russia’s ambassador says his country will not abandon its friends

His Excellency, Alexander Sergeyevich Kurmaz, Ambassador-Designate of the Russian Federation to Grenada
Share

His Excellency, Alexander Sergeyevich Kurmaz, Ambassador-Designate of the Russian Federation to Grenada said that his country is deeply concerned about the ongoing crisis in Venezuela.

Addressing an investment conference in Grenada on Friday, Kurmaz, who is scheduled to present his diplomatic credentials next Tuesday, said Russia will not be abandoning its friends and allies. “We are deeply concerned about the situation in Venezuela, but we want to send a clear message, that we do not abandon our friends and allies. In partnership with like-minded countries, including Grenada and other Caribbean countries, we will promote our common principles of non-interference, multilateralism, self-determination of nations with “recipes” imposed by outsiders,” he said.

The ambassador, who will be based in Guyana with responsibilities for St Lucia, St Vincent and the Grenadines, St Kitts and Grenada, said that now more than ever the region needs to keep its spirit of unity and solidarity in front of new policy challenges and other threats, including threats to security and climate change.

He told the participants that the Caribbean is at a turning point in history and Russia sees discord and misbalance in the regional cooperative mechanism. “It is clear that involvement of external forces and attempts to change the political landscape of the region have not been without consequences,” he said.

He said as a means to contributing to the development of the region, he informed the participants that Russia wants to establish full-scale project, technological and technological alliances that will bring benefits for both Russia and Caricom members.

“We also want to pursue cooperation in such as areas as oil and gas, hydro and atomic energy; aircraft and in particular helicopter industry, infrastructure, agriculture, biopharmaceutics as well as information and communications technologies,” he told participants at the 2019 Next Step conference. The conference is one of the activities of the St George’s Club, a Russia organisation aimed at bringing investment to the region.

Kurmaz told the conference that Russia’s goal is to have mutual beneficial and needed arrangement with all of the Caribbean countries.

NOW Grenada is not responsible for the opinions, statements or media content presented by contributors. In case of abuse, click here to report.
Tags: alexander sergeyevich kurmazlinda strakerrussiavenezuela
Next Post