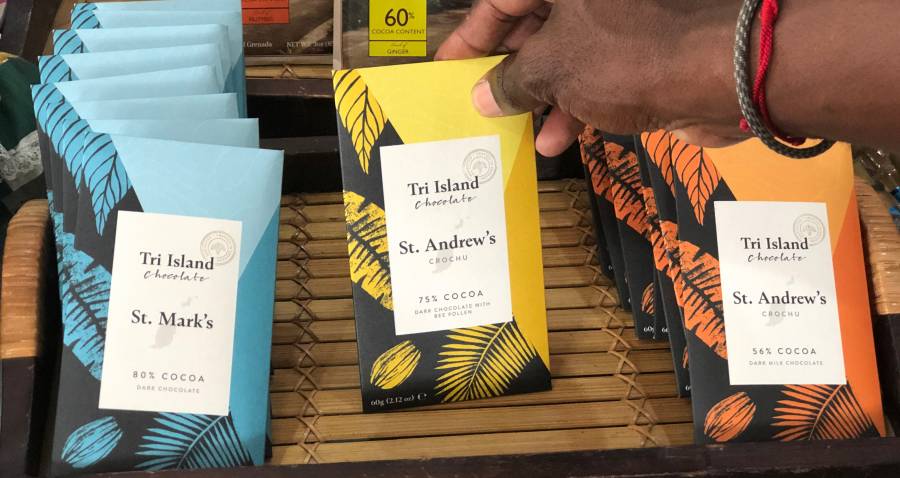 Grenada’s newest entrepreneur in the chocolate-making industry is seeking to revolutionise the way chocolate is produced on the island, taking full advantage of his nearly 10-years of experience working in digital marketing in the UK. Capitalising on his extensive background in digital marketing, Aaron Sylvester has applied what he has learned over the years to produce high quality fine flavoured chocolate.

Tri Island Chocolate was formed nearly 4 years ago, but the idea to produce chocolate came after Sylvester, following his retirement from the music industry, decided to do some soul searching for inspiration through his many travels to places like India and Vietnam. It was on his journey there that the idea to utilise the inherited lands from his grandparents left abandoned came to mind, with the goal of revitalising the cocoa industry by adding value to locally produced chocolate bars.

“To me, it is just creating products from the raw material we have whether it is bananas sun-dried dipped in chocolate, you then have an amazing product that I know sells in the UK and in the US, but I can’t find it here. And for me, it’s like that was where the penny dropped. Instead of making single products or everyone creating the same product in certain parts of the island, how about combining two things together that you think can work.”

Tri Island Chocolate is the smallest of the island’s 6 chocolate producing companies (The Grenada Chocolate Company Ltd, Jouvay Chocolate, Crayfish Bay Organic Estate Chocolate and Belmont Estate). The company has concentrated more on quality rather than quantity, generating 6,000 chocolate bars on average per year. The work to produce such chocolate is largely done by hand.

“One of the unique things that set me apart from most of the other chocolate companies on the island is that we are a tree to bar chocolate company, but ultimately it is pretty much myself that does most of the steps along the way so between harvesting the cocoa, and I do work with a farmer to do so but between harvesting the cocoa, to fermenting it to drying it and then to processing, I pretty much do all that processing single-handedly.”

Sylvester admits that there were many obstacles encounter along the way to establishing a chocolate company. “There have been multiple challenges along the way, whether it’s people not necessarily being open with advice and support, me having to learn a lot of what I have achieved on my own… whether it is through the making process or learning about maintaining the land.”

Tri Island Chocolate produces 3 varieties of dark chocolate from as high as 80% cocoa to 75% cocoa mixed with bee pollen, and 56% cocoa dark milk chocolate. A bar of chocolate can cost $30 and Sylvester explained why his price point is set that high.

“Most of the work is done with these bare hands so because of that we are a premium chocolate producing company, so we don’t have the luxury of a Cadbury or Nestle where we have huge machines that can purchase beans from Ivory Coast bring them in and just produce chocolate. Everything is done here so when we have a good harvest and we have a good amount of cocoa to work with then we can produce more chocolate. But if we don’t which is happening year after year due to climate change, we have less.”

He further explained, “The reason why the price point might be a premium one is that you can’t get a large amount of that chocolate. I can’t make 20,000 bars every year, that’s not going to be possible. It is a far smaller number so because of that scarcity around the product you have to pay a premium price.”

The company’s founder largely believes in allowing its customers the experience of knowing where their food is coming from and the various processes of transforming the cocoa beans into fine flavoured chocolate. This is done through guided tours of his 2-acre farm located in Crochu, St Andrew where visitors can see various farming techniques such as permaculture with plans to expand into worm compost and aquaponics system. “People have explained to me that they want to get involved and see it because for them where they come from, in places like Europe, the US and the UK, they just get it in a packet and consume it. They have no understanding of where it comes from. So for us, it has been about creating that opportunity for people to learn where their foods come from, to harvest it, see it and taste it and really appreciate it a lot more.”

NOW Grenada is not responsible for the opinions, statements or media content presented by contributors. In case of abuse, click here to report.
Tags: aaron sylvesterchocolatecocoacurlan campbellfarmtree to bartri-island chocolate
Next Post

Notice on tax from the Inland Revenue Division