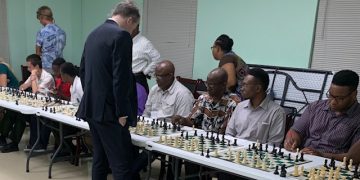 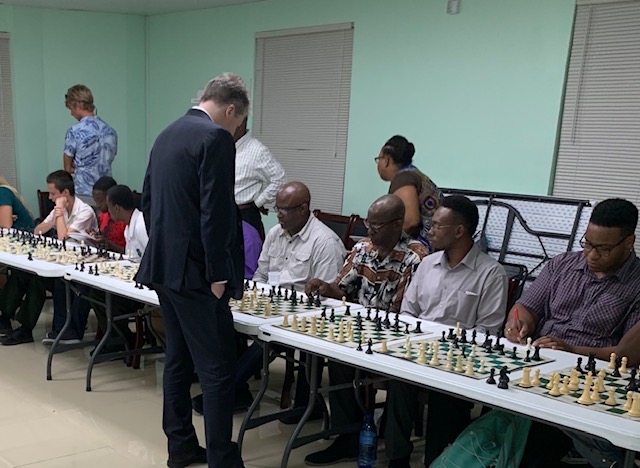 For the first time ever, a national body has been formed to promote the sport of Chess in Grenada.

The Grenada Chess Federation (GCF) was established by unanimous resolution and launched last Thursday, 28 February at a special meeting of over 40 chess enthusiasts at the Grenada Olympic House at Mount Rouge, St George’s. Special guest at the meeting was celebrated British chess player and Grandmaster Nigel Short who is on a mission throughout several OECS islands to ‘spread the gospel of chess’. Grandmaster Short is also a Vice-President of the World Chess Federation (FIDE).

Those gathered at the meeting used the opportunity to complete registration forms to become members of the GCF and most have already paid the EC$25 subscription agreed upon for the first year of membership.

Critical tasks of the GCF include promoting chess in schools, both primary and secondary, and in communities; organising national and other competitions; becoming a member of the World Chess Federation; and securing assistance for the widespread development of chess throughout Grenada, Carriacou and Petite Martinique. The GCF targets a membership of 100 by the 16 May AGM.

President of the Grenada Olympic Committee (GOC), Royston La Hee, who delivered brief remarks at Thursday’s meeting, welcomed the initiative taken to form a Grenada Chess Federation and pledged the support of the GOC.

Addressing the meeting before the exhibition matches, Grandmaster Short extolled the virtues of Chess, describing it as “the ultimate mind game…nearly infinite in its complexity”. Once considered a game for aristocrats, it has now become “a game for everyone” with millions playing worldwide, Grandmaster Short noted.

189 countries are now members of FIDE, making it one of the largest sporting bodies in the world. Island Catering contributed refreshments for the launch and exhibition matches.

Cruise guests’ experience enhanced through the use of experiential storyboards