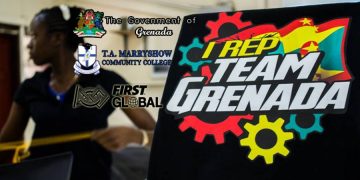 For the last two years, the students representing the TA Marryshow Community College Robotics Club have managed to improve their world ranking at the FIRST Global Robotics Challenge in Dubai. The Government of the United Arab Emirates of Dubai would be officially hosting the 2019 FIRST Global Challenge 3-5 October.

In 2017, the team entered the competition held in Washington DC for the first time and competed among 160 countries placing 109th. The FIRST Global Robotics Challenge challenges students to develop their capabilities in science, mathematics, technology, and innovation and apply them in the engineering of robots designed to perform a particular function. The following year, team Grenada placed 93rd in the world at the competition held in Mexico ahead of Caribbean countries such as Dominica (99th), Antigua & Barbuda (123th), Haiti (150th), Bahamas(151st), Saint Kitts & Nevis (152nd) and Saint Lucia (155th). Countries ahead of Grenada were Jamaica (15th), Trinidad & Tobago (57th), Cuba (77th), Barbados (84th) and Guyana (89th).

This year the FIRST Global Robotics competition will be held in Dubai following the announcement of His Excellency Mohammed Al Gergawi, UAE Minister of Cabinet Affairs and the Future, Vice Chairman of the Board of Trustees and Managing Director of Dubai Future Foundation.

Assistant Lecturer Electronic Department TAMCC Clement Commodore is hopeful that Grenada can again improve on their ranking that will see them placing in the top 10 countries in the world. “We hope to represent Grenada in that competition and that we will be an asset and we can actually do much better being one of the top ten countries hopefully even win the competition,” Commodore said.

The International FIRST Committee Association (FIRST Global) was founded by philanthropic investor Dean Kamen and is headed by former US Navy Admiral and Congressman Joe Sestak.

Commodore said their ambitious goal of placing in the top ten countries can be achieved. “With the Robotics Club that we developed in TAMCC, we are exposing students to a lot of the different aspects of programming and engineering is involved in building such robots and I am very confident we can do much better this year.”

For the past 2 years, the team was sponsored by the Government of Grenada, but this year travel costs for the team will be even more absorbent.

“The cost involved in such a competition is so high that I can’t even quote a figure. We have been sponsored by for the past 2 years; well the first year that we took part in the competition we had 6 students that [participated], we were sponsored by the Government of Grenada where they basically took care of airfare for six-plus people which cost a significant bit of money… I strongly believe that for the 2019 Dubai competition would require way more in terms of funding and some form of assistance,” Commodore said.

Although the team has not yet been selected for the competition in Dubai in October, Year 1 Information Technology student and a member of the TAMCC Robotics Club, Sarsha Newton, is optimistic that she will be among the group of students representing Grenada in Dubai. She said her passion for robotics stems from the excitement of creating something from nothing. “So you just start off with an idea and what you want to do and you just put the parts together and you code it and wow you actually have something that does what you want it to do which is really cool! Also the mechanics part of [robotics] kind of interests me, is like I learned so much in a short period of time.”

According to the website for FIRST Global, (For Inspiration and Recognition of Science and Technology), FIRST Global was established as a US-based 501(c)(3) not-for-profit public charity to provide the framework for an Olympics-style robotics challenge. It invites one team from every nation to participate in an international robotics event that builds bridges between high school students in the area of Science, Technology, Engineering, and Mathematics (STEM) with different backgrounds, languages, religions, and customs.

TAMCC IT students use technology to solve problems on campus