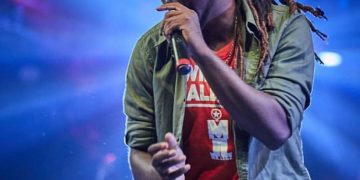 This story was posted 2 years ago
in Arts/Culture/Entertainment, Business, Video
4 min. read
Share

Capitalising on the success gained through his recent performance on the big stage in Trinidad, Grenadian soca artiste Hector “Mr Legz” Thomas has teamed up with Destra Garcia to release a music video of his song ‘Wining Challenge’ that took 3rd place in the Power category at the International Soca Monarch (ISM).

The music video produced by Arthur Daniel, Luni Spark, Destra Garcia, Electrify and Mr Legz, has already started receiving traction garnering over 20,000 views since being released on YouTube on 3 May 2019.

Mr Legz stated that his career in soca has definitely moved to another level but with this newfound fame he is determined to remain focused on the business aspect of the music industry and not get sidetracked by the fame.

The soca artiste who hails from Seamoon (Simon), St Andrew burst onto the local soca scene in Grenada in 2007 with his song ‘More Rags’ while still a student at the St Andrew Anglican Secondary School, but his love for music started much earlier around 2004 when he and his brother started making music. After getting bitten by soca bug, he was able to visit a studio for the first time and professionally produced his rendition ‘High’ in 2008. That allowed him to perform at the finals at the National Stadium in 2008 where he placed 3rd. He was able to again make the finals the following year. The proceeds from his first major taste of success that year were reinvested into his production and there started his journey as a musician.

His placement at the 2008 Soca Monarch competition opened new avenues for the young artiste to establish his own recording studio in 2010 called YTM Recordz, where he not only produced music for himself but also produced for other artistes. Many popular songs were released including groovy hits such as ‘Come Down Dey’ and ‘No Worries’. These hits were followed up by ‘Carnival Calling’ in 2014, ‘Loud Up’ in 2015 and another favourite, ‘Bessi Down’ in 2016. However, it was the production of his first 3 Riddims the Accordion Riddim, the Pink Panther and Boss Riddims that solidified his position as a legitimate producer.

11 years after placing 3rd at the soca monarch finals in Grenada, Mr Legz placed 3rd at one of the biggest stages for Soca in Trinidad during the International Soca Monarch (ISM).

He said getting to that point was not easy, but the exposure let him take his music farther since he has begun to captivate new audiences. “Trinidad market is a very big market. For example, you will find so much artistes in Grenada with hit songs and after carnival that’s it, but an artiste in Trinidad would have one good year with a hit song and he will be able to gain so much from that, from endorsement to doing shows all over the world, and that exposure in the Soca Monarch right now is giving me like a lot more bookings. Now Trinidad knows who (Mr) Legz, which is something I always wanted.”

Performing on the big stage has always been a lifelong dream, but he admitted that “I invested so much that if I didn’t place, the appearance fee would not have been able to cover my investment.”

Despite the fame, the artiste is focused on perfecting the business aspect of the music industry, something he has maintained throughout his career. Not much has been publicised of the artiste’s exploits behind the scenes, having produced for many household names including dancehall sensation Gully Bop, and mixing for Soca King Machel Montano, among others.

“Since before Soca Monarch in Trinidad, I have always been investing in knowing the business part of the music industry, because I always ask questions and do my research… I believe every artiste should learn the business side of it because you don’t want to get taken advantage of. You want to know when something is right or when something is wrong and for me, I have a lot of knowledge about the business side but there are things I still have to learn… it’s not only just being an artist going to the studio to record and going on stage and jump up.”

The sentiments expressed by Mr Legz were previously echoed by CEO of Made In Grenada, Dexter Mitchell who called for proper management structures to be put in place for Grenada’s music industry to maximise exposure received through the recent victory of Hollice “Mr Killa” Mapp, Jevaughn “Vaughn” John who placed 3rd in Groovy International Soca Monarch, Dingaan “Lil Natty” Henry, Nyelon “Thunda” Williams and Mandella Linksz, who competed in the Power and Groovy categories, respectively at the International Soca Monarch (ISM).