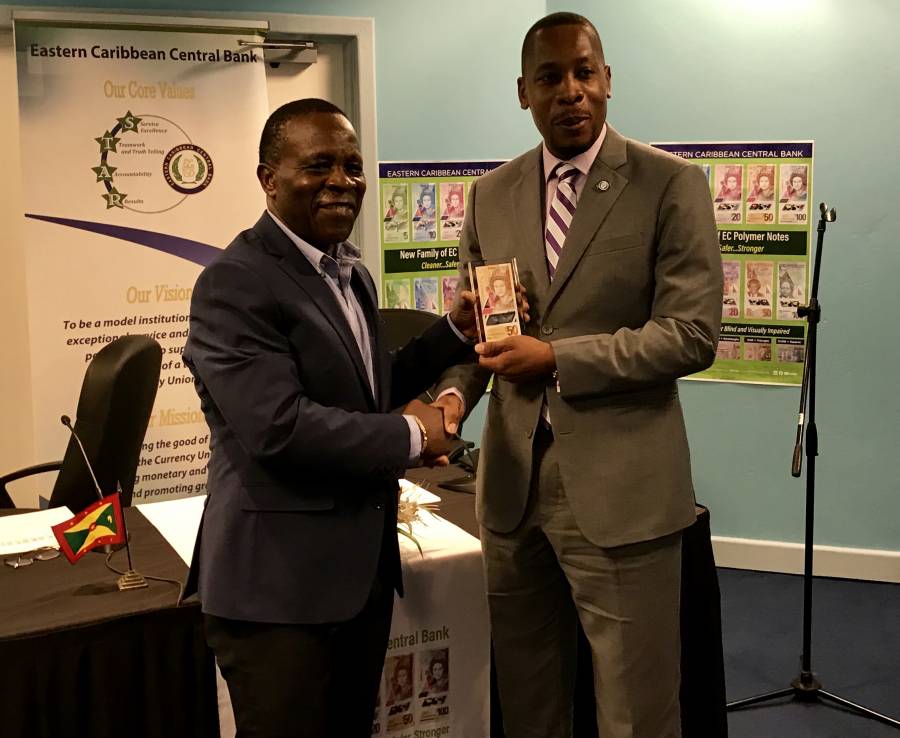 The new polymer notes are more resistant to dirt and moisture and therefore more durable than the paper notes currently in circulation.

Dr Mitchell hailed the occasion as historic, noting that, “The ECCB is the first Central Bank in the Caribbean to issue an entire family of notes on polymer. This is therefore a significant achievement for the bank and by extension, for all members of the Eastern Caribbean Currency Union.”

The Prime Minister commended the Governor and staff of the ECCB for the initiative. He said, “Today’s launch of the new family of EC polymer notes provides a clear demonstration of the bank’s leadership, innovation and its commitment to protecting our currency.”

In addition to being more durable, the new polymer notes are also more secure. Dr Mitchell said, “From a security standpoint, the new polymer notes would allow for the introduction of more advanced features to better protect our EC currency, making it even stronger. In a world of increasingly sophisticated criminal activities, security is a foremost consideration.”

Wednesday’s launch included the unveiling of the newly designed $50 note which now bears the image of former ECCB Governor, Sir Dwight Venner, who served in that capacity for 26 years.

Dr Mitchell said, “Sir Dwight must be recognised for the tremendous contribution he made, giving yeoman service to the ECCB and to the region as a whole. The Monetary Council is therefore pleased to unveil this $50 note in his honour and memory.”

An encapsulated $50 note was presented to Sir Dwight’s widow, Lady Lynda Venner who attended the launch which was streamed live to other member states of the currency union.

Governor of the ECCB, Timothy Antoine explained that the polymer notes are more cost-effective than paper. He said, “Although polymer notes are more expensive to produce upfront, their extended lifespan means that the notes are replaced less often. Consequently, there will be a reduction in transportation and handling costs, thus reducing the overall cost of cash for the ECCB, commercial banks and credit unions.”

Additionally, the new polymer notes include a special feature that makes it easy for blind and visually impaired persons to handle their own money when conducting transactions. This new feature is a welcome addition for members of the differently-abled community who were represented at Wednesday’s launch.

Speaking on behalf of her differently-abled peers, Sherry Hamlet, a teacher attached to the Resource Centre for the Blind, said the small change will make a big difference in the lives of visually impaired persons.

It is important for the public to be aware that both the polymer and paper notes will be in circulation at the same time as the ECCB plans a phased introduction of the new notes.