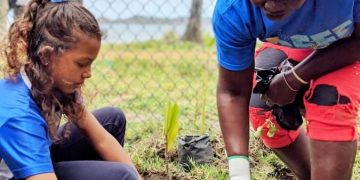 For decades the residents of Telescope in St Andrew have witnessed first-hand the destruction caused by wave erosion along the coastline. This poses a serious threat to villagers, many of whose houses are built near the coast.

Catherine Mascoll can testify to this threat having seen the destructive force of rising tides over the last 25 years. She stated that the shoreline continues to be eroded at a large rate and that her house is at risk. “The sea has taken more than half of the land in Telescope. My house is almost at the seacoast just the same.”

In an ideal environmental situation, tropical beaches are naturally equipped to deal with beach erosion. Mangroves work along with other coastal ecosystems like coral reefs to protect the coastline from erosion caused by sea surges during natural disasters, by acting like a buffer which absorbs the impact from waves. However, mangrove removal can have devastating consequences.

It is with great urgency that projects such as the Resilient Islands initiative were implemented by The Nature Conservancy (TNC) to assist Caribbean islands to adapt to the impacts of climate change through the promotion of coastal habitats by empowering communities to implement and sustain development plans.

Mascoll plays her part in the replanting efforts to restore the mangrove vegetation along the Telescope Beach. She was contracted by Grenada Fund for Conservation (GFC), to care for the mangroves by collecting propagules (seeds) which are cared for in the nursery before being transplanted.

The GFC is one of many partners of the Resilient Islands initiative. Together with the International Federation of Red Cross and Red Crescent Societies (IFRC), Government of Grenada and the Grenada Red Cross Society (GRCS), and The Nature Conservancy (TNC) they have staged Reef Week 2019 which started on Tuesday, 7 May with an Environment Fair Day on Telescope beach. The day was marked with presentations from various stakeholders providing practical activities such as mangrove planting, basic CPR training, beach profiling, the use of drones in conservation and water quality monitoring.

TNC personnel also engaged with students by testing their knowledge about the importance of mangroves and the need to maintain a resilient island. Form 4 student of Westmorland Secondary, Rikiba Bain was very impressed with the amount of information made available. “It’s very interesting because I have learned a lot of different things such as predators like lionfish. I also learned about climate change and that the reefs are dying and also [we learned] about plastic which has negative effects on the environment.”

“I’ll come back again every single year,” she added, “because it seems to me that there is always new information year after year. There are new findings, new discoveries and I like to keep up to date with these things.”

Expressing similar sentiments was Eli Zerpa, also from Westmorland Secondary. “I have always been in the water looking at the reefs and I find them beautiful and when I saw that they were dying, I was really sad so having the ability to learn more information about the reefs is really interesting,” he said.

Form 1 students Kebra Sylvester and Kayla Collins of St David’s Catholic Secondary were impressed with the display and information provided especially in information pertaining to resilience. Both agreed that community residents need to integrate ecosystem-based adaptation strategies that will prevent further destruction to the coastal area and marine life.

Reef Week started with a beach cleanup on the Telescope Bay in St Andrew on Sunday, 5 May 2019. This was followed by a research day at the Grenville Bay on Monday, 6 May. On Thursday, 9 May, a workshop for fisherfolk was held at Soubise, St Andrew and concluded on Friday, 10 May with a movie night in the same village.

Climate Adaptation Specialist with the Nature Conservancy (TNC) and Manager of Resilient Islands (RI) project in Grenada, Nealla Frederick, spoke of some initiatives that will be rolled out under the project. “We also have a fisher facility that we hope to construct and this is again based on having conversations with the fishers over the years.”

She indicated that fishermen were as much a part of the engagement process and they gave suggestions on what they think would assist them to build their resilience. The fishermen received training in disaster risk preparedness and CPR procedures by the Grenada Red Cross. Another major project, she said, will see community residents learning how to monitor water quality. “We will be doing a number of courses on water quality monitoring. We have a contract set up [where] community members will actually be trained in that and will be given equipment to continue once this projects folds, and hopefully the data they collect can actually feed into the national database for water quality monitoring.”

As part of the Resilient Islands project, Soubise and Telescope were identified as highly vulnerable and in need of adaptation action to implement a set of ecosystem-based adaptation (EBA) solutions. These actions include a climate-smart fisher facility in the village of Soubise and community-based water quality remediation project in Grenville Bay. Being a part of the International Climate Initiative (IKI), the Resilient Islands project receives support by the Federal Ministry for the Environment, Nature Conservation and Nuclear Safety (BMU), on the basis of a decision adopted by the German Bundestag.

Over a 4-year period, communities in the Dominican Republic, Grenada, and Jamaica will be better informed and empowered to integrate community and ecosystem-based adaptation into local and national decision-making and policies, to reduce climate vulnerability and boost adaptive capacity. It is expected to see continued on-the-ground interaction by TNC officials with the government and selected communities to enable them to lead the charge towards adaptation, risk reduction, and sustainable development goals.