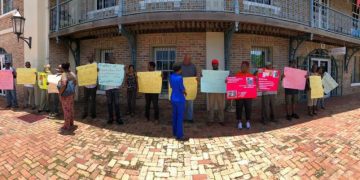 This story was posted 3 years ago
in Politics
2 min. read
Share

Joseph Andall, interim political leader of the main opposition National Democratic Congress (NDC), wants government to launch an investigation into the abuse of government assigned cellphones by non-public officers so that taxpayers will be provided with information about the total cost to them over the years.

“We are calling on the authorities to take immediate steps to launch a probe into the cellphone scandal and to leave no stone unturned in getting to the bottom of this,” Andall said during the second picketing organised by the party.

Held in front of the Ministry of Finance on Thursday, around 14 well-known supporters of the party gathered with placards which accused government of engaging in corrupt practices. This was the second picketing for August.

“This second protest is to draw attention to the rampant corruption that is taking place in Grenada and the almost total breakdown of governance in our country,” Andall said. “We think that it’s unconscionable that after having to saddle the people of this country with over 30 new or increased taxes through this so call homegrown structural adjustment programme, the government and the ruling party should be covering up or engaging in defrauding the taxpayers of this country,” he added.

Raymond Roberts, a former private member of the Upper House representing the Labour Movement, but who contested the 2018 General Election as the NDC candidate for the Constituency of St George South, also called for a probe into the cellphone scandal.

“I believe we are becoming a corrupted banana republic and we need to clean up,” he said. “The idea here is to call on our leader, that is prime minister Dr Keith Mitchell to treat leadership with more dignity,” he added.

Catherine Roberts Pascal, Deputy Chairperson of the St David NDC support group whose placard focused on the Prime Minister’s decision to have some of his security details financially compensated instead of taking vacation, said that the media is fearful to seek clarity. “My concern here today is for the media, they have become very fearful to ask questions,” she said.

The cellphone scandal became the subject of discussion through a talk show radio host who is aligned to the NDC. The leaked information disclosed government’s total cellphone bill for the months of April, May and June 2019 along with the calls and other transaction made by holders of the phones.

On Tuesday, the telecommunications provider to government said that an internal probe conducted, revealed that the leak did not originate from its operations.

NOW Grenada is not responsible for the opinions, statements or media content presented by contributors. In case of abuse, click here to report.
Tags: cellphoneinvestigationjoseph andalllinda strakernational democratic congress
Next Post

Garvey and racial consciousness in the 1920s and 1930s