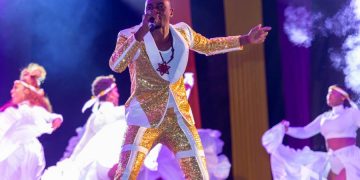 This story was posted 3 years ago
in Arts/Culture/Entertainment, Video, Youth
4 min. read
Share

New Groovy King Shondell “Dash” Amada managed to secure 4th victory for the 2019 Groovy Soca Category of the Soca Monarch competition. This year he will have to share that title with Jevaughn “V’ghn” John as they both tied for first place with 261 points each.

As a follow-up to “Gifted” last year’s hit song, Dash sought to encourage and motivate people to maximise on their talent and to never lose hope in life. Shortly after his performance, he spoke with members of the media on his presentation. “The onstage presentation came from just being observant… my performance was the answer to questions and I came and deliver. I got the crowd up; never dropped their energy. I just continue working and it feels great to be the 4th time consecutive Groovy Monarch of Grenada, to be honest.”

On sharing the crown with his competitor, Dash said, “Obviously V’ghn is a force to be reckoned with, he is a talented youth. To share the crown, the judge’s decision is final and I am still undefeated.”

Dash reminded his fans that he will be back in 2020 to defend his title, and that his performance “ came from my heart. It was real, I wasn’t just singing to me, but I was singing for those who don’t have a voice,” he said.

Capturing his first Groovy title after placing second last year, V’ghn has remained consistent and as shown that tremendous growth as an artiste having placed second in the 2019 International Groovy Soca Monarch final.

Hailing from Sunset village, V’ghn made a fashion statement dressed in his sparking black suit laced with silver trimmings as he emerged from his throne on stage to perform “Soca Nice”.

During his interview, V’ghn showed much love to the fans and the other artistes in competition. “I feel good, I want to say congratulations to Dash also, the hard work we put in at the end of the day it paid off, the judges did their job, we did our job the people enjoyed the show and I am satisfied,” he said.

Now that the competition is over V’ghn is preparing to go on tour. “We are working on so many tours and I will be heading to Africa. I am heading back to Japan this month as soon as the carnival is done and I will be bringing Boyzie with me. So I am just trying to help my other artistes and just push for Soca music and push for Grenada as much as I can.”

V’ghn said much more can be expected from him in the future and anticipates competing. “To be honest, it’s more about the music first, I will never say no to competition because it is always an option but it will not be every year that you will see me in the competition since we are focusing on other bigger things to help move the culture,” he said.

The following are the rest of the results and points for Groovy Monarch:

NOW Grenada is not responsible for the opinions, statements or media content presented by contributors. In case of abuse, click here to report.
Tags: dashgroovy soca monarchjevaughn johnshondell amadaterra de governorv'ghn
Next Post