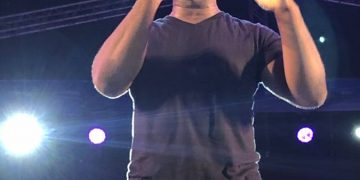 This story was posted 3 years ago
in Arts/Culture/Entertainment, Video
3 min. read
Share

After 15 years of competing at Dimanche Gras, Sean “Sour Serpent” Niles was finally able to capture the crown for the first time. Fearless and careless was the recipe for victory he said. This year’s Dimanche Gras Calypso competition saw what can be described as one of the biggest upset in the career of Finley “Scholar” Jeffrey as he failed to defend his title, attain his 10th crown and solidify his name in history.

After an 8-year hiatus, Raymond “Beast” Matthew with his songs “The Oil Boom” and “My Apology” walked away with second position leaving Jeffrey to settle for third with his contributions “Dancing Without Feet” and “Sing for the Lord”.

Niles’ first contribution entitled “Two wrongs make a right” tackled the current industrial climate between the government and the Grenada Union of Teachers regarding gratuity, while “Call Buju” lamented on the lack of respect that calypsonians receive locally in stark contrast to the reception and compensation of foreign artistes. Niles also tied in other issues that arose in the last few months.

He discarded his formal wear on stage as a sign that he was fed up with the way calypsonians are treated and that based on the love and support that Buju Banton received following his show in May, that he should be the one contacted to address the plight of the people which was once the responsibility of calypsonians.

After being crowned, Niles said he was not surprised at the results. “It has been a long time I have been going in with the two better songs. More than 6 or 7 times I have been in with the better songs and whatever happened, I just couldn’t pull it off until tonight,” he said. “I was more comfortable as a matter of fact. I was Fearless and careless so I think that is what did it.”

With two crowns, after capturing the Independence Calypso title, Niles promises next year will be even better as he has not yet reached his zenith in his musical career.

“I want to continue to compose creative lyrics and regionally I have been assisting people in composing in Trinidad and Tobago and I am presently setting up a website it is called “The Calypso Shop” so people around the Caribbean can come in and purchase a song at whatever arrangement, because I believe two songs from me a year is not enough,” he said.

Niles already has three crowns from the Independence Calypso monarch and has placed second five times. This year’s Dimanche Gras 2019 saw newcomers, including two females and for the first time ever, both Jeffrey and his son Filandi “Stunna” Jeffrey competing.

At the end of the Dimanche Gras, the Spicemas Corporation took the opportunity to award 3 veteran calypsonians for their years of service and contribution to the artform. Among those receiving lifetime achievement awards were Black Wizard who recently celebrated his 50th anniversary,  Flying Turkey and Praying Mantis. The artistes received a trophy and took patrons down memory lane with their hit songs.

Black Wizard performed “When the carnival over” released in 1991. Praying Mantis who rose to fame in the early ’90s sang his hit song, “Rosalie” while Flying Turkey refreshed the memory of patrons with “The Denture (doh take it out)”.

Below are the results and points obtained from the Dimanche Gras:

NOW Grenada is not responsible for the opinions, statements or media content presented by contributors. In case of abuse, click here to report.
Tags: beastcalypsocurlan campbelldimanche grasfinley jeffreymonarchraymond matthewscholarsean nilessour serpent
Next Post

Why are students in Grenada failing Math?