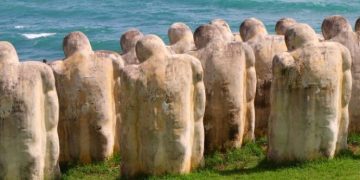 This story was posted 3 years ago
in History, PRESS RELEASE
3 min. read

Remembrance of the Slave Trade and its Abolition Photo: UN
Share

The night of 22 to 23 August 1791, in Saint-Domingue (today Haiti and the Dominican Republic) saw the beginning of the uprising that would play a crucial role, in the abolition of the transatlantic slave trade.

It is against this background that the International Day for the Remembrance of the Slave Trade and its Abolition is commemorated on 23 August, each year.

This International Day is intended to inscribe the tragedy of the Slave Trade in the memory of all peoples. In accordance with the goals of the intercultural project “The Slave Route”, it should offer an opportunity for collective consideration of the historic causes, the methods and the consequences of this tragedy, and for an analysis of the interactions, to which it has given rise to between Africa, Europe, the Americas and the Caribbean.

UNESCO, as one of the premier international organisations charged with the engendering of Peace and the upholding of the Declaration of Human Rights, adopted by General Assembly of the United Nations in Dec, 1948, rightly views the Slave Trade as on of the greatest violations of Human Rights, in the history of mankind.

UNESCO has sought to ‘break the silence’ about the Slave Trade and slavery in general through the organising of its Slave Route Project which started in 1994. Since then, many countries have celebrated this day – the first of which were Haiti in 1998 and Senegal 1999, in many different ways through cultural events, or debates.

The office of the Grenada National Commission for UNESCO has decided to work together with the National Museum to unveil a commemorative banner at the National Museum. We would like to invite the General Public and the Press to join us at this event starting at 10 am on Friday, 23 August 2019. We also have a documentary on the UNESCO Slave Routes Project, which is being aired by the Government Information Service (GIS), and copies can be made available to interested media houses, schools or other institutions.

It is our hope that there will be greater awareness of the African Diaspora throughout the world, and what they have contributed to the world of science, religion, education, technology, the environment, etc.

We are aware that carnival has just been completed, celebrating various aspects of our culture, much of which was derived form our forefather’s experiences during slavery. Grenada, as do many countries of the Caribbean, have tended to focus on the Emancipation of Slavery, for which a national holiday is proclaimed.

Many people may want to forget our history for whatever reasons – shamefulness, fear, or misplaced sense of values; some may not even be aware of it; yet there are others who see knowledge of history as important to know who they are; where they came from and to better understand our heritage.

The celebration of the abolition of slavery is also significant because it falls within the period that the UN General Assembly, in its Resolution 68/237, proclaimed the International Decade for People of African Descent (2015-2024).

We want to promote the day by informing people about the historical events associated with the slave trade, the consequences of slavery, to promote tolerance and human rights and work with educational institutions, civil society and other organisations, to inculcate in future generations the “causes, consequences and lessons of the transatlantic slave trade, and to communicate the dangers of racism and prejudice.”

NOW Grenada is not responsible for the opinions, statements or media content presented by contributors. In case of abuse, click here to report.
Tags: commemorative bannergrenada national commission for unescointernational day for the remembrance of the slave trade and its abolitionnational museumracismsaint-domingueslave trade
Next Post