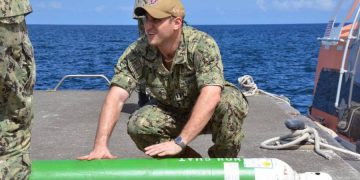 This story was posted 3 years ago
in Health
3 min. read 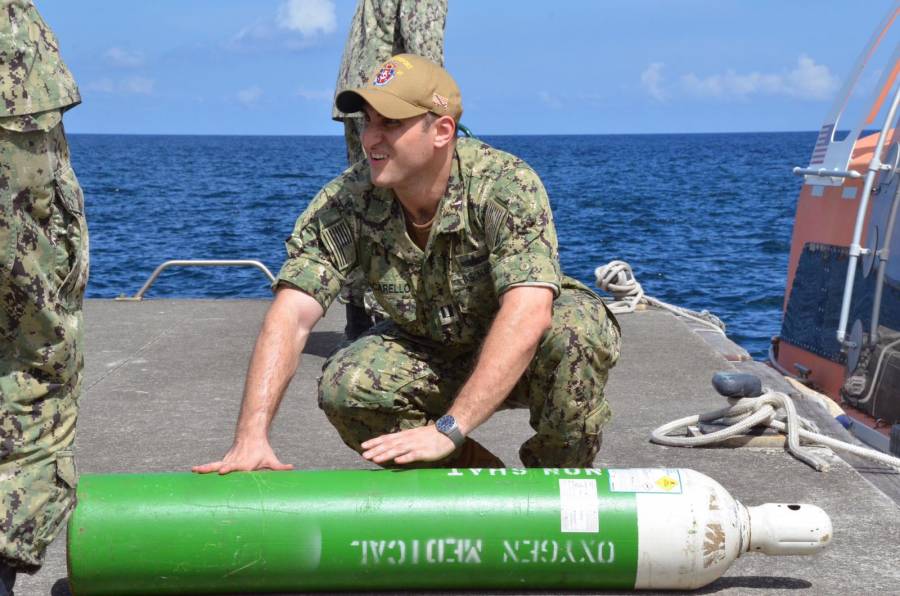 The General Hospital experienced a delay in the delivery of oxygen from Trinidad, but on Sunday, the gap was filled when visiting US Naval ship Comfort gifted eight large cylinders of oxygen.

Dr Carol McIntosh, Director of Hospital Services, said she was glad to receive the cylinders of oxygen from the USNS Comfort. “The General Hospital’s normal supply was interrupted last week when a mechanical failure on the delivery boat from Trinidad and Tobago delayed the arrival of the hospital’s resupply,” explained a release from the US Embassy in Grenada. This was later confirmed by an official of the Ministry of Health.

With three patients currently in intensive care and one undergoing surgery on Sunday, Dr McIntosh said she was thankful for the Comfort’s collaboration. “With the unexpected, we have relief, and with relief came the Comfort,” McIntosh said.

USNS Comfort is a former oil tanker which was purchased and redesigned to become a hospital ship for combat zones, and among its many abilities is producing its own oxygen through a plant onboard. Members of the maintenance crew on board the ship after observing the problem with the oxygen plant at the General Hospital embarked to repair the problem.

By Tuesday more than 600 Grenadians had sought the services provided by the ship at its two on-island clinics. The release from the US Embassy said that Dominic McLawrence, who arrived at the Kirani James Athletic Stadium on Saturday morning at 7:30 am was seen by an optometrist and scheduled for cataract surgery onboard the ship on Sunday, 15 September.

His daughter, Kerensa, and granddaughter made the journey with him. Kerensa said, “My father was happy his eyesight would be better. Cataract surgery is not available in Carriacou and here at the General Hospital in St George’s we came in May and we were told we would have to wait until January for the surgery. Here, we heard about the Comfort in August, saw the doctor yesterday, and he’s having the surgery today.”

The medical staff on the ship explained they monitor the recovery, watching for redness, discharge, or discomfort. Provided recovery is smooth, they prescribe the necessary pain medications and lubricant eye drops and pass off medical records to the Ministry of Health for the necessary follow-up.

“My father was nearly blind in his left eye. Now we look forward to him being able to read and dial the phone without our assistance. I would encourage anyone to come. The people, the doctors — everyone — has been really great.”

The USNS Comfort’s second day of medical services saw the discharge of several recovering patients from onboard the ship. Patients, friends, and family hugged sailors and took selfies with medical personnel, thanking them for a pleasant stay aboard the Comfort.

Members of the media who were participating in a tour of the ship of Monday, witnessed Ministry of Health medical personnel on hand to ensure the smooth transfer of medical records and to monitor recovery.

One of the departing patients, Francis Jeffery, who underwent cataract surgery on Sunday told the press, for those still questioning the free medical care, “They should have no fear,” continuing, “They should come on board.”

The USNS Comfort held the second day of patient screening for onboard surgeries on Tuesday, 17 September for nearly one hundred persons who have been referred by their physicians and the Ministry of Health.

At the medical sites at Kirani James Athletic Stadium and the Grenada Trade Centre, persons waiting in line are given health lifestyles presentations about non-communal diseases and treated to the sounds of the US Fleet Forces Band, known as “The Finest of the Fleet.” When the band is not performing there is recorded background music playing.

The ensemble will join the Royal Grenada Police Force band at the Esplanade Mall for a public concert on Thursday, 19 September at 4 pm. All are invited. The musical showcase is one of several community events conducted by personnel aboard the Comfort. Volunteers will participate in painting the Mt Gava Foundation beginning at 9 am on Tuesday, 17 September.

The medical staff from the ship will be at local medical sites through Friday, 20 September for free medical care, before the ship leaves for St Lucia.

NOW Grenada is not responsible for the opinions, statements or media content presented by contributors. In case of abuse, click here to report.
Tags: carol mcintoshgeneral hospitalhospitallinda strakeroxygenusns comfort
Next Post