This story was posted 2 years ago
in Athletics, Sports
5 min. read 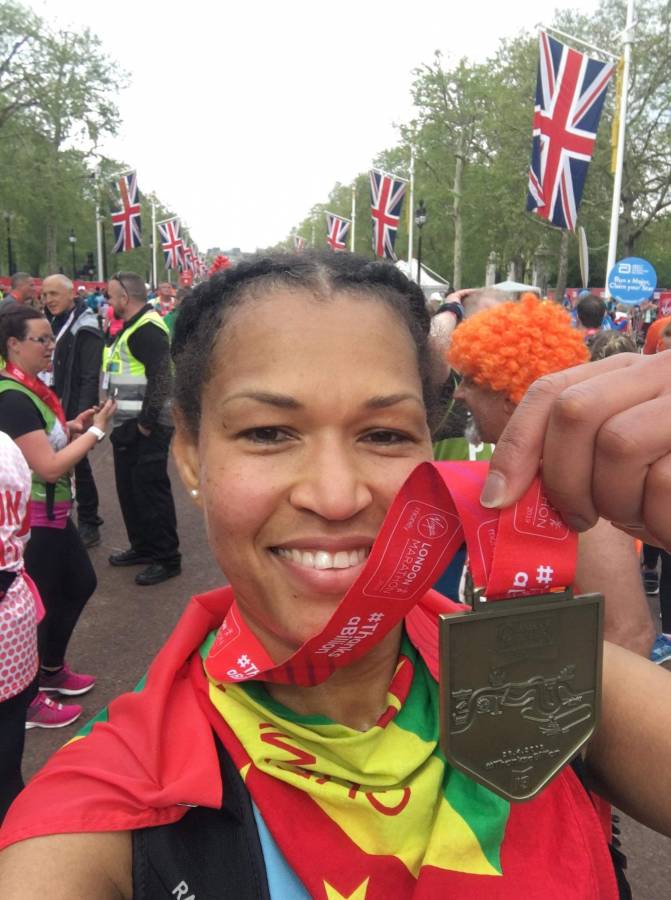 On the international stage, Grenada’s flag continues to garner more and more recognition since the exploits of son of the soil Kirani James at the 2012 London Olympics. Since then, a number of Grenadian athletes including Kurt Felix, Lindon Victor, Rondell Bartholomew, Kanika Beckles, and most recently Anderson Peters — who captured gold in men’s javelin at Doha, Qatar — have shown that great things can emerge from this island nation.

However, while many people compete for glory and fame, Grenadian athletes compete for a much more selfless cause, to represent their country on the world stage. After emerging on the scene in the UK as a competitive marathon runner, Vanessa “Bungi” Nair has received international recognition for herself and the island of her birth for doing just that,

“Being able to represent Grenada and fly the Grenadian flag is something really special to me. I feel like we need to let people know that we are here too and we are not just sun, sea and sand”. I have accumulated lots of medals from different races. Some of them are special, some were difficult to get (I had to run while it snowed/rained) For some the terrain was very hilly. I like the design of some of my medals. My best medal so far is London; it is very big and heavy,” Nair wrote.

Nair was born in Grenada and attended the Grand Anse RC School and St Joseph’s Convent St George. In North America, she attended the Canarsie High School before returning to Grenada to attend the New Life Organisation (NEWLO). She migrated to England and pursued a Bachelor’s degree in Early Years and started her own childcare business. A sense of unfulfillment led her to undertake another challenge in her life with a renewed sense of purpose.

“I joined a running club (Newcastle Frontrunners) which was close to my home and started my half marathon training with them. I did my first ever half marathon in 2016. I thought that was it. I got the running bug and continued running with the club. The running club introduced me to many other running events. I continued to represent Grenada at every opportunity. The following year the Great North Run asked to do the run again (2017). By this time, I had applied for the London Marathon despite knowing that it is really hard to get into and it was a bigger challenge. I got rejected. I continued running different races. I applied the following year (2018) got rejected again and thought enough of this, I’ll just find another marathon. I secured a place on the ‘Liverpool Rock and Roll Marathon’. That was my first marathon in April 2018,” Nair wrote.

She continued, “I had to increase my running miles and train for this marathon. It was like doing two Great North Runs. I never thought I could do it, but I tried and I completed it. I wore a large Grenada flag around. I ran for 26.2 miles and I only heard one person who shouted ‘Go Grenada’. Sometimes people asked ‘which country’s flag is that?’ That inspired me more to represent Grenada. With my marathon training, I entered two popular, must-do marathons in the North East of England (Kielder Marathon, October 2018 and Town Moor Marathon, November 2018).”

“God somehow wanted me to do it and at my running club’s AGM they were given one London Marathon place to raffle. I put my name in the hat (just like I did the previous year). Out of 13 entries, my name was pulled out of the hat! I was over the moon! I was going to be running the London marathon 2019! I have met runners who have been trying for 10+ years to get a place to run the London Marathon and they are still unsuccessful. I felt extremely lucky and proud that I would get to represent Grenada again. I did the Virgin Money London Marathon and was super proud to have competed in one of the world’s major marathons (Berlin, New York, Chicago, Tokyo, Boston).”

For her tenacity and drive to compete, Nair was used as a poster girl for the company and was a guest speaker at the 2017 Great North Run annual conference held in Newcastle. She was also part of the Birmingham City Council’s bid to host Commonwealth Games 2022. But her passion for long-distance running only recently manifested after being convinced to sign up to participate in The Great North Run, upon noticing an ad in the local newspaper.

“It was there, while at work one day a colleague noticed an ad in the local newspaper calling for people from all countries in the world to take part in ‘The Great North Run’. The Great North Run in an annual half marathon (13.1 miles) in the northeast of England. It was once the largest half marathon in the world, now it is the world’s favourite run based on the success they had when they launched the campaign to find someone from every UN-recognised country in the world,” Nair wrote. “My colleague suggested I sign up for it. I said, no, because I am not a runner and 13.1 miles is way too much for me to even think of running. I normally run to bed after work. I was never a runner, and I was always last in cross-country at school.”

Nair has now set her eyes on tackling her newest challenge yet, which is to compete at the upcoming Commonwealth games 2022. “I would love to represent Grenada at the Commonwealth Games 2022. It would be a dream and an honour. I would continue to do the country proud. I think I should be considered being part of the team as I was part of the bidding process. I am not sure if Pure Grenada and the Grenada Olympic Association or whoever makes the selection is aware of how proudly I represent Grenada. If I get selected to be part of Team Grenada at the Commonwealth Games 2022, it would give hope to any aspiring athlete that they can achieve big things too. Just try something new, you never know where you will end up.”

With the 2022 Commonwealth Games still a long way ahead, Nair has placed focus on competing at the Amsterdam Marathon on Sunday, 20 October.

Statement from GUT Credit Union on incident at Carriacou branch