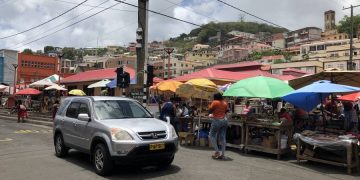 This story was posted 2 years ago
in General News, Video
3 min. read
Share

Constructing a three-storey carpark to put an end to parking woes experienced by the motoring public in the Town of St George is among suggestions put forward by Reverend Samuel “Tim” Byam of the Willie Redhead Foundation (tWRF).

As the volume of vehicles begins to increase Byam said this suggestion must be urgently considered as a possible alternative to ensure the smooth running of the traffic on nation’s roads especially in the heart of St George where there is a need for space for parked vehicles.

“You definitely have to have a three-storey carpark building, but at the same time you must have regulatory parking, one of the things that have already been done on some of the curbs on the sides of the roads you see that it is painted white and that allows for vehicles to park but then you can do a colour coding for people who own businesses in town. You can do a colour code system where you give a sticker indicating that they are allowed to park in certain places, but definitely the town is overcrowded with vehicles and of course the problem of parking, so there needs to have central parking maybe one or two building so it doesn’t look too odious.”

Byam has called for public discussion on the issue of parking with the view of gathering innovative ideas to control the volume of vehicles on the nation’s roads. He believes one of those ways is to improve the public transport system throughout the town. “You can’t stop people from owning vehicles, but at the same, you need to improve the public transportation system. Once that is done there will hardly be a need for people to want to drive into St George and park when you know it has a reliable public transportation system — so all of this we have to look into,” he said.

The issue of making the Town of St George paedestrian-friendly and enacting regulations to allow for the provision of parking spaces whenever a new building is being constructed was another concerned expressed by Byam. “Just walking along on Church Street and some other areas in town, going down Young Street you have to be watching your elbows because a vehicle can just take it off. Imagine having to walk while looking out for vehicles and open drains. So you have to have a more paedestrian-friendly town and you have to lessen the amount of traffic in town. There must be regulations implemented that a certain amount of parking based on the amount of square foot of the building.”

The issue of limited parking spaces in the Town of St George was addressed publicly earlier this year by Parliamentary Representative for the Town of St George, Peter David during the launch of the Willie Redhead Foundation’s first heritage publication, “The Pride of our Waterfront Heritage – The Renaissance of Urban St George.”

During his address, Minister David admitted that there is another major issue that must be addressed which involves inadequate parking in the town, hence his proposal to transform the present bus terminal into a parking lot. This he said should drive more business activity in the town and reduce the traffic congestion. “If the business community continues on the track without any parking in the town of St George, they would wither and die, because everyone will say let’s go to the south.”

The Traffic Department of the Royal Grenada Police Force (RGPF) continues to enforce clamping of wheels of vehicles either parked in a no-parking zone or vehicles causing an unnecessary obstruction in the town which is also contributing to traffic congestion. The police advise the motoring public to utilise paid parking spots at either the Esplanade Mall carpark, or carparks located near the NIS and Melville Street Fish Market and avoid attempting to park near the location where they intend on conducting business.