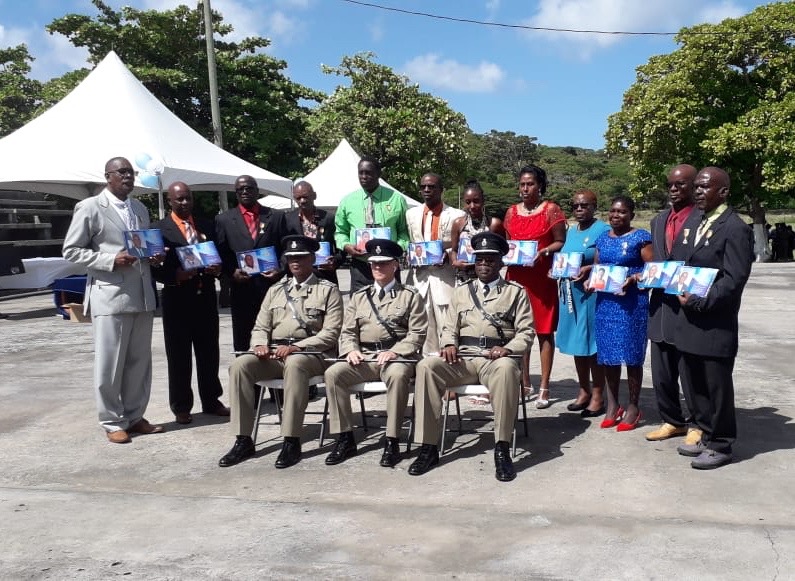 The underlining message embedded in most of the addresses to the retirees of the Royal Grenada Police Force (RGPF) was to use their knowledge and experience gained on the job to continue to serve their communities.

On Wednesday, 4 December, twenty police officers of various ranks from ASP to Royal Constable with a combined 587 years of service, retired from the RGPF. The Police Welfare Association staged a farewell ceremony in their honour at the Special Services Unit (SSU) compound at Camp Saline.

These police officers entered the service at various times, dating back to 1984, and in recognition of their services each received a plaque and medal of service in recognition of their contribution to the RGPF. As customary, the retirees marched off to Auld Lang Syne under a guard of honour, and elicited tears and applause from their comrades as they gave their final salute to Acting Police Commissioner, Edvin Martin.

Assistant Commissioner of Police (ACP), Michael François, reminded them not to allow their talents and abilities to wither away but to put them to good use in their respective communities.

“As you retire you can look back and feel part of the part you played in seeking to build a culture in the RGPF that reflect values that underpin the service that we provide in many ways. Life begins at retirement today, and by today’s standard you are young men and women with a lot to offer to your immediate communities and to the wider society. I order you to reflect on how you are going to use your wealth of experience and talent for the common good. It is always said that the only true retirement is that of the heart. I know that your hearts are not retired and they are in the right place,” ACP François said.

Chairman of the RGPF Welfare Association, Inspector Simon Douglas, outlined areas where retirees can focus their attention post-retirement to have a more meaning life: to build a strong spiritual connection with their creator, improve their social interaction, maintain a positive attitude towards retirement and maintain a healthy body through diet and exercise. He also stressed that they now have a duty to be more integrated within the fabric of their communities. “Be intentional in creating your social network. During retirement also understand that folks from the job aren’t very likely to be a part of your post-retirement life. For those of you who are solitary try to discover the engage others; join community groups with people of similar interests. Volunteer in organisations that help people, for giving others brings the greatest sense of fulfilment. Use your knowledge and experiences to guide and encourage those of us who are still on the job.”

Kerabe Belfon, a former officer of the RGPF delivered the charge. He emphasised the importance of retirees to remember that life does not end after retirement and that they are still expected to play a leadership role in their communities. “I challenge you to enter the phase with a sense of purpose so that you could remain in good health and prosper. I understand the fight. I understand what it means to finish the race. I tell you brethren when my time arrived I finished that race sprinting. As retiring [people] I say to you, finish the race sprinting; finish the race strong so that when you move into that new phase the energy that you have you [will] transform it in realising the goals that you have beyond the RGPF, beyond service to this nation.”