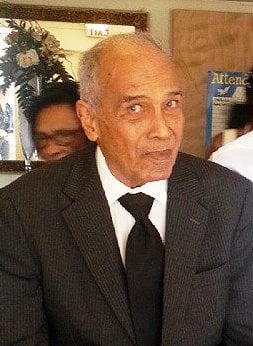 This story was posted 3 years ago
in General News, Tribute
2 min. read

8 days after his wife Joyce passed away in the USA on Thursday, 26 December 2019 at the age of 84, Herbert John Preudhomme, a former member of parliament and the Deputy Prime Minister to the late Sir Eric Matthew Gairy, has died.

Preudhomme who was ailing for some time, died on Thursday, 2 January 2020 at the age of 89, six days before his 90th birthday.

The couple who lived in the USA, recently celebrated 65 years of marriage in October 2019.

Preudhomme, affectionately called “Uncle Pre” represented the St John constituency for the Grenada United Labour Party (GULP) from 1961 to 1979. Before his advent into politics, he was employed in his family business after leaving school and later joined the firm of Jonas Browne & Hubbard Ltd from 1956 to 1958.

According to the website gogouyave.com, Preudhomme got his feet wet into elective politics in 1958 when he was elected to serve as a member of the opposition. He served from 1958 to 1960 during which time he was also member of the Tourist Board and member of Housing and Planning Authority.

In the general election of 1961, he ran for the St John’s Constituency, easily defeating John DeCoteau of the Grenada National Party (GNP) and was appointed Minister for Commerce, Industry and Tourism.

In the elections of 1962, he narrowly lost to Mc Donald Welsh of the GNP by 41 votes but reclaimed the constituency seat in parliament in 1967 by defeating Mc Donald Welsh by 906 votes. He then was appointed Minister for Local Government, Housing, Labour, Youth Development and Sports.

In 1972 he was re-elected to parliament for St John defeating Johnny Branch of the GNP and he was appointed Minister of Communications, Works, and Labour. After Grenada gained independence, he was appointed Deputy Prime Minister.

In the 1976 elections, he was again re-elected to parliament by defeating Lloyd Noel by 446 votes. He was Deputy Prime Minister and Minister for Health and Housing.

After the 13 March 1979 Revolution he was, like most ministers, detained without charge from until 31 December 1981. After his release, he went into private business.

However, after democracy governance was restored to the island following the collapse of the revolution, he contested the 1984, 1990, 1995 and the 2003 general elections for either the constituency of St John or the Town of St George as a member of the GULP and was defeated each time.

He migrated to the USA to be near his family and to enjoy his retirement. The couple is survived by four children along with their grand and great-grandchildren.