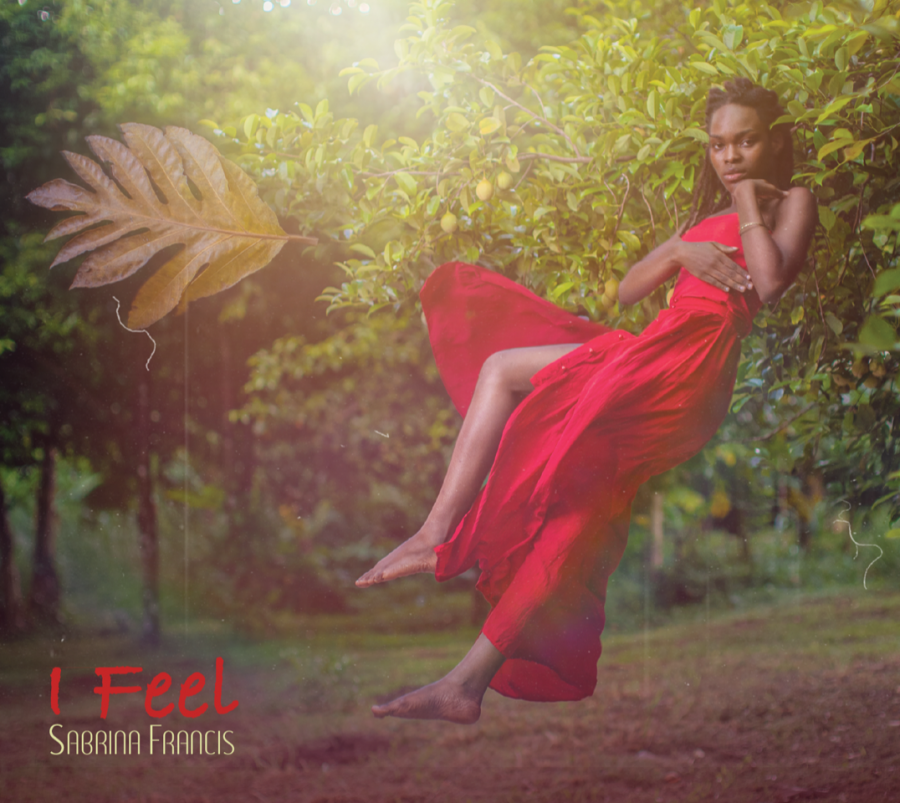 This story was posted 2 years ago
in Arts/Culture/Entertainment, PRESS RELEASE
4 min. read

Sabrina Francis, one of Grenada’s most gifted and innovative artists, presents her second album “I Feel”.

3 years after her first album “Think in Colour” she surprises her fans with a fresh sound, showcasing not only her extraordinary vocals but also distinct yet versatile songwriting skills.

The 19-year-old girl who sang “This is home” for the first time during a Dinghy Concert in 2014 is now a 26-year-old young woman, a singer-songwriter with a record of achievements and ambitious plans for her future. For the second time, Francis will host her own concert “Wide Open” on 11 April, Easter Saturday, featuring other Grenadian artists in celebration of local musical talent.

But, first things first. On Saturday, 22 February, Francis is launching her new album “I Feel”. The 10 new songs of which the album “I Feel” is comprised of, span uplifting and light-footed songs to heartbreaking ballads. And in between, again and again, the airy, inspirational stories and melodies about the hardship of human relationships. All these songs reveal a refined musicality combined with purposeful lyrics. Francis is growing, maturing: “I tried more things out this time, I was less shy when letting the other musicians know what I wanted/needed for my songs, mainly because I actually knew what I wanted. Also, I had a few years to bond with my music, which sounds strange, doesn’t it? But, I feel like now I open my mouth to sing and my soul just floats out.”

Francis knows that even with all the talent she has success won’t come by itself. There is a lot of hard work to be done, creativity needs to be fed. A trip with her musical partner Dieter Burkhalter mid-2019 to South Africa and Mozambique was for her a life-changing adventure and for her music, a defining experience. They had several collaborations lined up, to explore musical roots, cultural influences and differences. Francis and Burkhalter returned with seven new songs. Some of them like “Papamani”, “Mama Say” and “Karma won’t forgive us” made their way onto the new album. The production of an album is despite all the streaming platforms a worthwhile endeavour. Francis invited two musicians from abroad to create the sound she and Burkhalter were working on for months: Mamadou Sarr, a very experienced percussionist from Senegal who is playing and touring with the popular Sona Jobarteh from Gambia, and Beda Mächler, a young and very talented guitar player from Switzerland. The other musicians present at the Mount Agnes Studio, Grenada were Dieter Burkhalter, Keane Jules, Jerrod Nelson and Godson Brown together with the vocalists Zorina Andall and Denny Cronneit. Hervin Hood from Grenada did the recording, Samuel Baur did the final mixing and André Pousaz the mastering in Switzerland. All in all, a huge undertaking, but for all the artists involved a rewarding and valuable engagement. They all left the recording studio after 10 days with the confidence that the vibes, the quality of sound, the soul of the music they created together will find resonance with listeners of the album.

It is music played with real instruments by real musicians which is Burkhalter’s credo as a musician of 35 years. “There is a unique quality to music played with real instruments never mind that there is still a ton of electronics involved. We tried to create a modern and distinct sound which correlates wonderfully with Sabrina’s voice and her songwriting.”

On Saturday, 22 February, Francis will not only host a launch party at the Coconut Beach Restaurant from 6 pm, but she will also be singing her new songs and signing the album. At that party, the first CDs will be available exclusively before the CD is released to the rest of the world on 1 March. And for all the fans who can’t attend the beach launch, Francis is simultaneously launching the album digitally. Whoever has signed up for this special launch will get each day from 22 February, a link to a hidden page where one song per day is streamed with the lyrics, music videos and videos behind the scenes. Signing up is still possible on www.sabrinafrancis.com.

There is one question left which troubles each artist when releasing an album: Which song will be the title song. Francis has chosen the most intense, most reduced song out of the ten, “I Feel”. “It is a very special song to me. It was the easiest and quickest to write, in just about an hour. It was the easiest to produce as Dieter came up with only the keyboard and the cello as instrumentation. But, there is an intensity to this song which goes straight to the heart.”

Since September of last year, Francis and her team are taking the marketing of her music very seriously. The efforts are showing a slow but steady growth of the fan base not only in Grenada and the region but internationally. Results have already yielded an invitation to tour for three weeks in France this summer. In the latter part of 2020, Francis and her band FLOM, (Dieter Burkhalter, Alesia Aird, Keane Jules, Jerrod Nelson) will be touring for two months in the UK, Germany, Switzerland, Austria and Italy. The timing of the release of this second album “I Feel” is spot on.