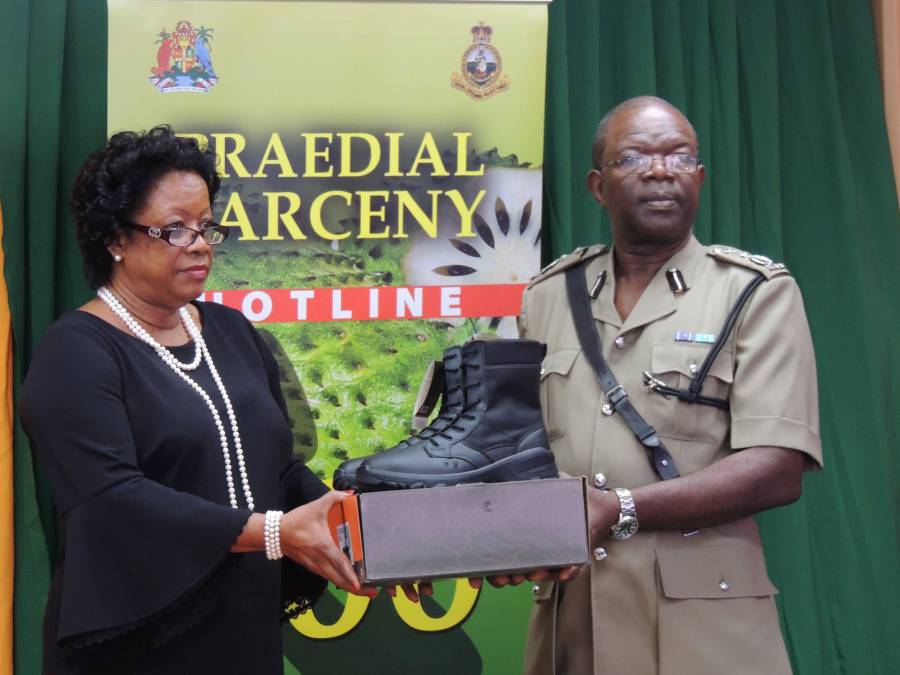 The act of praedial larceny results in hundreds, sometimes thousands in losses to local farmers which can become a disincentive to the investments they have made in the agricultural sector.

As part of the efforts to curb theft within the agricultural sector, the Ministry of Agriculture and Lands in collaboration with the Royal Grenada Police Force (RGPF), launched the praedial larceny 24-hour hotline that would serve local farmers.

“The new hotline that was set up is really to deal with praedial larceny matters. Sometimes when you call the police station you would have to wait, but that line is clear for praedial larceny matters,” said Hon. Yolande Bain Horsford, Minister for Agriculture and Lands. She was speaking during the commissioning ceremony for the new hotline at the Ministry of Work’s Conference room on Tuesday, 18 February.

Statistics from the RGPF show that praedial larceny continues to impact many of our local farmers. In 2018, there were 403 reported cases of praedial larceny that increased by 8.7% to 438 cases in 2019. With the launch of this new hotline, there is hope that instances of the crime will decrease.

According to Assistant Commissioner of Police, Michael Francois, “It would give our farmers an opportunity to report in a timely manner, incidents that might be taking place on their farms, in various areas of the country. They would be able to receive a response in a timely manner.”

The Royal Grenada Police Force is an active player in the management of the new hotline, which will be operated from its Radio Control Centre at the Police Headquarters. “What this would do is to ensure that at a controlled centre, which operates 24 hours per day, the information can be relayed to any particular area in Grenada that the report is made. The responsible persons at the centre would ensure that the complaint is dealt with and followed through to the end,” he added.

The Ministry of Agriculture forges with other initiatives towards curbing the crime. “During the first quarter of 2020, there will be a greater effort in the fight against praedial larceny and the amendment of the Praedial Larceny Act. The Ministry of Agriculture and Lands will commence a rigorous public awareness and education campaign, having recognised the need to have greater public participation in the fight against praedial larceny,” the minister also disclosed.

NOW Grenada is not responsible for the opinions, statements or media content presented by contributors. In case of abuse, click here to report.
Tags: agriculturefarmerinvestmentmichael francoisministry of agriculturepolicepraedial larceny
Next Post