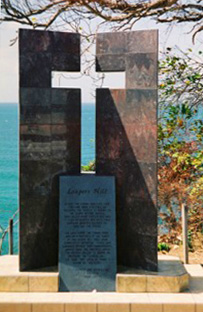 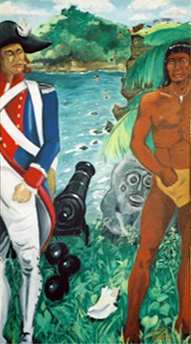 The events that led to the “leap” off the hill at Sauteurs are shrouded in a tale of war, colonization, love, revenge, greed, deceit and genocide, and have been subjected to centuries of mythology. The story begins with the Island Carib Thomas, who having been rejected by Chief Duquesne’s daughter, killed her brother and ran away to Martinique. While in Martinique, Thomas informed Governor Du Parquet that he could “deliver” the Island Caribs of Grenada because he knew of their secret meeting place.

On 30 May 1650 a force of 60 men, under the cover of darkness, surprised the Island Caribs in a cabet or “long house,” situated on a hill overlooking the sea, and began a bloody slaughter. As many as 40 Island Caribs may have plunged several hundred feet to their deaths. Rather than offer an inglorious surrender to the French, the Island Caribs committed an act that has left them a legacy remembered today as a symbol of resistance to European domination. The hill from which they leapt bore the French name Le Morne des Sauteurs: “Hill of Leapers/Jumpers,” and was later affixed to the town that developed around the small bay. 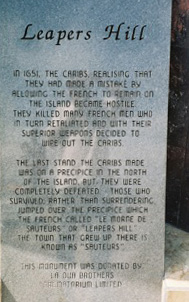 NOW Grenada is not responsible for the opinions, statements or media content presented by contributors. In case of abuse, click here to report.
Tags: amerindiananguscaribdayfrancefrenchheritagehistoryjohn angus martinleapermartinpatricksauteursthis day in history
Next Post